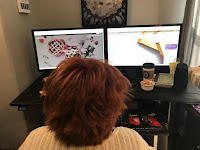 I recently came across this article that addressed a study of an interesting phenomena. The study looked at the idea that Most Authors Can Hear Their Characters Speaking to Them.

It was noted that Alice Walker while writing The Color Purple was often visited by her characters. Sometimes choosing their own actions. And other well-know authors such as Robert E. Howard (Conan the Barbarian) said they felt sometimes held hostage by their characters.

This particular study, done by researchers at Durham University, surveyed authors attending the Edinburgh International Book Festival in two different years. The intent was to look at just how common the phenomena is for writers. What do you think the results were?  I'd be very interested in hearing from some of the other Stiletto Gang authors as well as other writers as to whether you hear your characters.

As for me, although I've long argued that the author directs the story, I confess I do sometimes hear from my characters. Often when I'm attempting to send them in a direction that fits me but doesn't fit them. Caro in the Pampered Pets series, and Sugar in the Sugar & Spice books are both far braver than me. They are much more likely to insert themselves into other people's business. Their backgrounds are not mine. And truthfully, I'm much more of an armchair detective. I don't see myself chasing down a murderer. But that's the fantasy, right? The characters we write about (or read about) are not us. Sometimes they have to remind me. 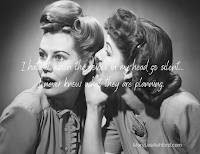 So what's going on? Are we delusional? Having hallucinations? Too much caffeine? The study's lead, John Foxwell, a postdoctoral research fellow at Durham, says that what the authors who were surveyed describe is less hallucination and more like "inner speech." Inner speech is what most of us experience when we think verbally and some of us are more aware of it than others.

In conclusion, though this was a small sampling, Writers Inner Voices and it's companion study, Readers Inner Voices, did come to some interesting conclusions and there are some additional studies being done around inner speech as well as imagination and the senses. So stay tuned!

Mary Lee Ashford is a lifelong bibliophile, an avid reader, and supporter of public libraries. In addition to writing the Sugar & Spice series for Kensington, she also writes as half of the writing team of Sparkle Abbey. She is the founding president of Sisters in Crime - Iowa and a member of SinC, MWA, and Novelists, Inc. She loves encouraging other writers and connecting with readers. More info here: www.maryleeashford.com

The latest book in the Sugar & Spice series is QUICHE OF DEATH which is currently a special deal at Kobo for $2.99.