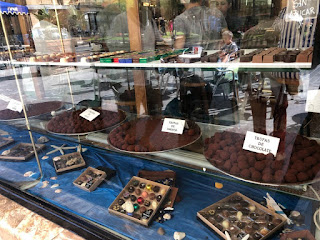 Chocolate truffles are round candies made with creamy, chocolate ganache centers and coated with chocolate, cocoa powder, or chopped toasted nuts. They get their name from their resemblance in shape and size to the edible fungi, but that is where the resemblance ends.

The first chocolate truffle is rumored to have been created in Chambery, France, but variations soon sprang up in Switzerland and other European countries. The Californian truffle is credited to Alice Medrich, who, after tasting truffles in France in 1973, formulated a larger, lumpier version and began selling them in her store, Cocolat, which soon expanded into a chain. Thus began the American obsession with truffles.

Chocolate truffles play a role in MURDER IN THE ONE PERCENT, the first Detective Parrott Mystery novel. Thirteen friends gather for a weekend retreat in a country mansion in the elite Brandywine Valley, and the sumptuous menu for their Saturday night dinner includes truffles, made by one of the guests.

Vicki is known for her decadent candies, but when her least favorite fellow guest is found dead the next morning, some wonder about Vicki’s recipe.

While you ponder whether a poison could be delivered in such a delectable bit of heavenly chocolate, here’s my mother’s easy recipe for chocolate truffles:

One or more of these toppings: finely chopped nuts, unsweetened cocoa powder, sprinkles

8.       Stir until chocolate has completely melted.

9.       Cover with plastic wrap, placed directly on the chocolate mixture to prevent condensation.

12.   Roll each ball into toppings, as desired.

14.   Cover and store at room temperature up to four days, or in refrigerator for up to two weeks.

If you’d like the menu and more recipes from the gourmet meal served in MURDER IN THE ONE PERCENT, sign up for my monthly email newsletter at http://saralynrichard.com.

Award-winning mystery and children’s book author, Saralyn Richard has ink in her veins. A former urban high school educator, she’s living the dream, connecting with readers through her books: A Murder of Principal, Naughty Nana, Murder in the One Percent, and A Palette for Love and Murder. Saralyn participates in International Thriller Writers and Mystery Writers of America, and teaches creative writing. Follow her at https://www.amazon.com/Saralyn-Richard/e/B0787F6HD4?ref_=. 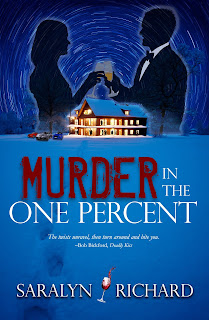 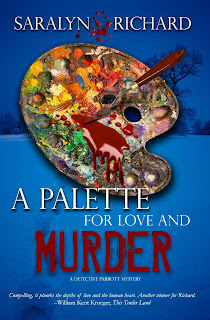 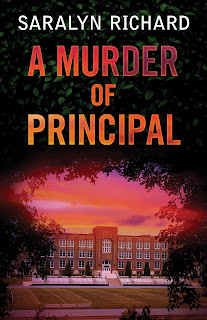 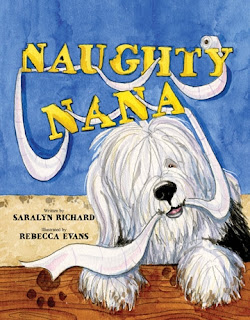 Email ThisBlogThis!Share to TwitterShare to FacebookShare to Pinterest
Labels: #A Murder of Principal, #A Palette for Love and Murder, #chocolate truffles, #Murder in the One Percent, #Naughty Nana, #recipe