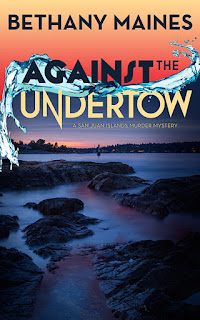 In 2015 when I wrote An Unseen Current, I had no intention of writing a sequel.  It was a quirky, semi-cozy mystery with a heroine based on an ex-coworker of mine. My friend Jennifer, became Tish Yearly, an ex-actress who returned from the wilds Hollywood and channeled her creative energies into... Marketing? My friend (who I did ask before borrowing her life story) moved on to the next adventure—working at a winery.  (Which, no matter which way you slice it, is WAY better than working for an architecture firm.)  And in my book, Tish gets fired from the architecture firm and is forced to move in with her ex-CIA agent grandfather on Orcas Island in the San Juan Islands of Washington State. And of course, murders, mysteries and the zaniness of island life ensues.

I also wrote the book in part as a catharsis for having been let go during the great economic downturn and while I left room for sequels I didn't think that I would emotionally feel the need.  And then... I had a dream.  I have author friends who have routinely based their works on dreams.  Not me.  I am generally wide awake and noodling about what would happen if I took two weird ideas and mashed them violently together in a fictional soup of deliciousness.  However, in this instance I had a very brief dream about riding a ferry and when I woke up the opening scene of Against the Undertow hit me like a brain wave.  And not just the scene, it arrived with the title!  Or at least the Undertow portion of the title.  I've never had an idea arrive quite that way before, but I wish it would happen more often.  I felt like a genius.  Of course, it took me most of a year to figure out the rest of the plot and write the dang thing and that does take the feeling of geniosity down a notch, but still... welcome to the world little sequel.

Against the Undertow is now available for digital pre-order.  Print and digital will be available June 12.  >>PRE-ORDER NOW!<<