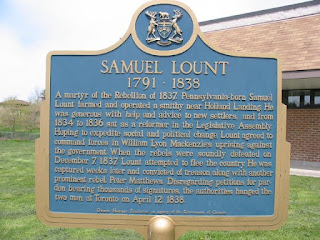 Readers of my Glass Dolphin Mystery series know that the book is set in the small, historic town of Lount’s Landing, Ontario, Canada. While Lount’s Landing is a much fictionalized version of Holland Landing, where I lived for 25 years, the man who it was named after—Samuel Lount—was very real.

The first time I'd read about Samuel Lount was in 1991, shortly after moving to Holland Landing. There, outside of the Holland Landing Library and Community Centre, was a plaque dedicated to his life. The writer in me was immediately curious. Why would a man hanged fro treason be commemorated on a historic plaque?

I learned that Lount had been a blacksmith and farmer who lived in the village of Holland Landing. He was also a member of a Quaker sect called the Children of Peace. The Children of Peace, who were largely gathered into one village north of Toronto called Hope (now Sharon, Ontario), were deeply concerned with the plight of the poor, which they blamed on the capitalist market economy.

Poor harvests and economic depressions had caused widespread poverty for many families, while wealthy landowners prospered. The village of Hope itself was located in the riding represented by William Lyon Mackenzie, and each time he won an election, large crowds of up to a thousand people escorted Mackenzie to the legislature.

In late November 1837, Lount, on behalf of William Lyon Mackenzie, approached the Children of Peace to join in a political march on the legislative buildings. In a brief skirmish at Montgomery’s Tavern, two members of the Children of Peace were killed. Lount, referred to as Colonel Lount in legal documents of the time (although he had no military background) was captured and arrested.

In spite of a personal plea for mercy from Lount’s wife, Elizabeth, to the governor, he was hanged for treason on April 12, 1838, along with another supporter of the cause, Peter Matthews. As the two men passed fellow prisoners on their way to the scaffold, Lount is reported to have said, “We die in a good cause; Canada will yet be free.”

It stood to reason that THE HANGED MAN’S NOOSE, book one in my Glass Dolphin Mystery series, would have some focus on Samuel Lount, and indeed, the book’s title is the name of a pub on the town’s historic Main Street (the owner is a history buff).

Of course, I’ve yet to hit a hole in one – or find a dead body. Still hoping for the first, and quite happy to keep the second firmly rooted in fiction.

Readers and authors: Do you enjoy and or employ some facts with your fiction?