Getting the Setting Right

Shari here, taking a bit of a break from writing Book Three in my Lobster Shack Mystery series. I just mailed in copy edits on Book Two, Against the Claw, which will be published on July 31. My kids love the fact that it comes out on Harry Potter’s birthday!

When I started writing the first book in my series, I thought about the ingredients I wanted to add to the story. What do I like in a mystery? I definitely wanted a play-fair puzzle with lots of possible culprits. I like a fast pace, in the snappy style of Murder, She Wrote. I love a fish out of water story, so I landed Allegra Larkin, my ballerina protagonist, in a lobster shack. Most especially, I wanted the setting to make the reader feel like they were taking a New England vacation. 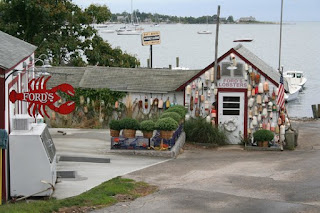 Actually, of all the ingredients, the setting worried me the most. Even though I live in the area where my series is set – the Connecticut shoreline and I am just minutes from some great lobster shacks – I was concerned about doing justice to the feel, details, and history that make this such a great place to visit.

My fictional Lazy Mermaid lobster shack is a combination of several shacks that I visited when I did my Lobster Shack Tour last summer. From Connecticut to the Cape to Maine there are lots of lobster shacks. What do they have in common?  The sunburned diners at splintery picnic tables, the dive-bombing gulls, blue sky and blue water, the briny sweet taste of lobster, the long lines and jammed parking lots.

What does my fictional Lazy Mermaid Lobster Shack have that they don’t? For a start:
A cook who serenades the lobster with Broadway show tunes.
Walls decorated with not just the typical fishing nets and wooden lobster traps, but also shelf after shelf of a mermaid collection called “mermaidabilia.”
A shack set in a little village where the buildings are unchanged from the time they were built in the mid 1800s.

A couple of weeks ago, I received a note from a reader who told me that my book made her feel like she was a little girl again, right back in the seaside cottage her family rented on the Connecticut shore not far from New Haven. It was her family’s tradition to visit a lobster shack and get lobster rolls once every summer. She was sure that the shack in my book was the one that her family had visited all those years ago. She even sent me a picture of her family at the shack.

Well, I was thrilled that I’d captured the feeling of this reader’s childhood New England vacations, but I didn’t have the heart to tell her that my lobster shack was fictional.

But the lovely fan letter has given me some hope that I’m getting the setting right. I hope if you’re in the mood for a New England vacation, you’ll visit the Lazy Mermaid Lobster Shack in my fictional Mystic Bay, Connecticut. Let me know if you have a good time, okay?

Shari Randall is the author of Curses, Boiled Again, Book One of the new Lobster Shack Mystery series from St. Martin's Press. Book Two, Against the Claw, will be published July 31, 2018. You can see what's new with her at https://us.macmillan.com/author/sharirandall/.