#MeToo and My Second Mystery


When I began to write my second mystery, I placed the crimes to be solved in a revolutionary setting. I wanted to reflect on my participation in the radical movement now known as Second Wave Feminism. Back then we just called it women’s lib. 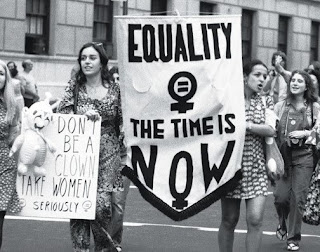 My book Rainy Day Women came out in 2015, slightly wrong for the era. This was a time, for example, when most young Hollywood actresses eschewed the title of feminist. The term was derided for being anti-men and it was dangerous to be seen as that. It annoyed me—no, it made me just plain mad—to read these women’s comments. Most of them were under thirty years old, and few knew how things had been in prior decades—how constrained the roles of women really were.
While the plot of my mystery is completely fictional, the feelings my amateur sleuth Austin Starr as she attends consciousness raising groups parallels my own. I provide a record of what it was like, the stages I went through, as I learned how women were subjected to men for millennia—forever, really—and discovered ways to go about changing that.
Back then I thought it would be an easy fix. Oh my, how young I was. How naïve. I thought equality was a reasonable thing to strive for and that most men would be rational and say, “Yeah, sure, ladies. Whatever you want.” I thought things would be “fixed” in a decade or two.
And so here we are today. Six months after #MeToo became A Thing. Two days after The New York Times and The New Yorker reporters shared the Pulitzer Prize for Public Service. Their expose on sexual harassment included the predations of the film mogul Harvey Weinstein. Their reporting unleashed a storm of  fury that built upon the anger of hundreds of thousands of women who had aleady taken to the streets across America—and also around the world—the day after the presidential inauguration in January 2017.

I am woman, hear me roar. In numbers too big to ignore. And I know too much to go back an' pretend . 'Cause I've heard it all before. And I've been down there on the floor. No one's ever gonna keep me down again.
So wrote and sang Australian-American performer Helen Reddy in 1971 on her debut album. The song "I Am Woman" hit at just the right time to become the anthem of us libbers. We wanted equal opportunity for jobs, decent childcare, help with the housework (HELP?!), reproductive freedom, and serious treatment as a member of the human race. Sexual exploitation and abuse was not mentioned much, if at all. Women kept their sad, sordid stories of abusive bosses, strangers, and relatives mostly to themselves.
Flash forward to today. Now we know. Boy oh boy, do we know. With Weinstein leading the parade, many powerful men followed. Famous men in entertainment and the arts, restaurant chefs, and politicians keep being called out, making headlines, and falling like dominoes. Some hit the skids and lose their jobs for small sins, others for egregious ones. But still, Weinstein remains the rotten gold standard of this type of horrible male behavior. This new climate of women’s awareness has caused actresses who formerly would not call themselves feminists instead to brand themselves as such. Now the pretty young things walk the red carpets together in solidarity.
And if, after you have read about all this agitation, after you have seen it in the streets and on television, perhaps you want to understand where it sprang from. If so, take a look at my mystery. Yes, Rainy Day Women shows what it was truly like for one twenty-three-year-old woman in 1969. And besides, why were those two leaders of women’s groups in Seattle and Vancouver murdered anyway? And who done it?


Kay Kendall is a long-time fan of historical novels and now writes mysteries that capture the spirit and turbulence of the sixties. A reformed PR executive who won international awards for her projects, Kay lives in Texas with her Canadian husband, three house rabbits, and spaniel Wills. Terribly allergic to her bunnies, she loves them anyway! Her book titles show she's a Bob Dylan buff. In 2015 Rainy Day Women won two Silver Falchion Awards at Killer Nashville.
Visit Kay at her website < http://www.austinstarr.com/>
or on Facebook < https://www.facebook.com/KayKendallAuthor>