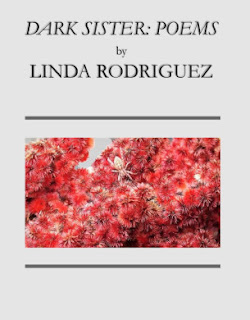 It's National Poetry Month, and I have a new book of poems out. Dark Sister is a book of the heart for me, in which I tell stories from my family and other spaces that really matter to me. Some of the poems, of course, are lyric poems, but with me, the narrative drive is overpowering, so most of them are stories, little and big.  Many of the stories I tell in this book are concerned with my beloved Cherokee grandmother, who was one of the strongest influences on my life.

If you'd like to check out the book in more detail--or even order it--you can learn more about it here.

So, to celebrate both National Poetry and the publication of my tenth and newest book, Dark Sister, here is a story in a poem about my grandmother and her baskets. 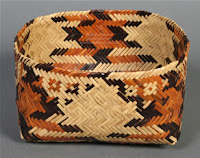 I loved Grandmother’s baskets when I was small.
They had intricate patterns and figures
woven into them in brown, black,
yellow, red, and orange.
She had different sizes and shapes,
used them for storage rather than display.
My favorite was in reds and yellows with a black border.
It looked to me as if woven of fire and grasses.

I would climb into cupboards, find one,
and ask why she didn’t keep it out on a tabletop
where everyone who came in could admire it.
“These aren’t the best ones,” she said
as she fingered baskets that looked beautiful to me.
“We used to make them from rivercane,
which makes a better basket and dyes the best,
but they rounded us up in concentration camps
and drove us on a death march to a new land
that didn’t have our old plants like rivercane
so now we use buckbrush and honeysuckle.”
Grandmother shrugged. “You make do.”

I asked her to teach me how to make a basket
like the one I loved with feathers of fire
along its steep sides. She shook her head.
“It’s a lot of hard work.
First, we need black walnut, blood root,
pokeweed, elderberry. Yellow root’s the best yellow,
but blood root will have to do.
They’ve dug all the yellow root
for rich people’s medicines, call it goldenseal.
Got to have our dyestuffs first.
Got to forage for most of them.
It takes lots of trips, out and back,
to get enough to make good colors.”

I knew I could do that and said so.
She laughed. “You’ve got to know what to pick
or dig or gather. It’s like with my medicines.
Can’t just go taking any old weed.”
I pointed out that I was learning from her
about the Cherokee medicine plants. She just shook her head.
“It’s not the same. I grow most of those.
Haven’t taken you out for the wild ones yet
because you’re too little still. Same for dye plants.”

I nagged at her for days, begging her to teach me
so I could have a basket of my own.
I had in mind that amazing fire-flickering basket.
I wanted to make one just like that.
My visit was over without her ever giving in.
I was used to Grandmother’s strength of will.
I knew I would have to try harder next time.

There was no next-time visit.
My mother had always hated her mother-in-law.
Now, she won the battle to keep us away.
Our relationship poured out in letters
until my mother destroyed them,
refused further correspondence.
Years later, Grandmother wrote me—
a letter that slipped past my mother’s scrutiny—
that she was making a basket
one last time for me.
I knew she was very ill,
soon to die.

I don’t know who got the beautiful baskets
when Grandmother died, especially the one
that I loved when I was small.
Her sister and niece who cared for her
in her last illness, I suppose.
That’s fair. My parents had divorced by then,
and my mother allowed no contact
with that family. But
a lumpy, brown-paper-bag-wrapped package
with Grandmother’s shaky, spidery handwriting
arrived for me after her death.
My mother opened it first and laughed.
I stood waiting eagerly to snatch up
the last thing my grandmother would ever give me.
“Look at that,” Mother said with more laughter.
“That ugly old thing’s supposed to be a basket,
I think. She sure lost her knack for that
at the end, didn’t she?” 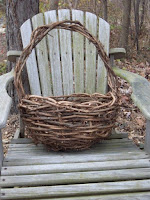 When I was small and visiting, I knew
Grandmother already had arthritis
in her hands. That’s probably why
she wouldn’t teach me to make baskets—because she didn’t have the dexterity any longer
to make the kind she once had.
I still have that simple handled basket
of vines (probably honeysuckle).
The whole thing is dyed black.
There are no intricate patterns of flames
or anything else. It’s just solid black.

I can see her plodding out to gather
butternuts for the black dye
and to pull the honeysuckle vines,
stripping off the leaves.
I can see her gnarled hands
painstakingly weaving under and over,
no fancy twills or double-woven sides.
Hard enough to shape
a shallow but sturdy gathering basket
for her long-unseen granddaughter.
All these years later
I have my own herb garden
where many of her medicine plants grow.
When I gather them to dry for teas and poultices,
I use that black vine basket.
I think it will last forever.