April is my birthday month. We’re not going to talk about exactly which one. It’s been a hectic month that included working with my editor on my new police witch book, House of Rose. April also is the month for Holocaust Remembrance Day, and in between working on my book, I had the privilege of playing a small role in helping to host “Violins of Hope” in my city of Birmingham, Alabama. It was a unique and amazing experience.

Amnon Weinstein, a violin maker in Israel came to Birmingham this month with his family for a week of concerts and educational programs. Like his father, Weinstein dedicated his life to making and repairing violins. As a child, Amnon never heard his parents speak much about the Holocaust. The trauma of losing hundreds of their extended family was too overwhelming to give it voice, but one day after Amnon’s father had died, a woman came into his shop with a violin that had been through the Holocaust. When he opened it, there were ashes inside. The woman explained that it’s owner had been forced to play it inside a concentration camp while prisoners were marched to their deaths. 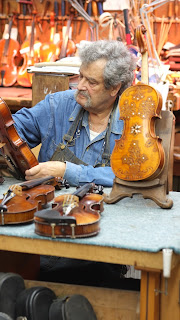 Shaken, Ammon looked with new eyes at the numerous violins that had been brought to his father in Israel after WWII because people didn’t want anything that was made in Germany or associated with that country, and he decided those violins had voices that needed to speak and stories that needed to be told.  Some of the instruments, he learned, had kept people alive during the Holocaust, others brought the beauty of music into a dark place and time, and so, they were not just violins of tragedy but violins of hope.

Many Jews in Eastern Europe played the violin, as reflected in the movie Fiddler on the Roof. It is said that the violin is the closest instrument to the human voice and also that it is the easiest instrument to pickup and run with. Professional musicians, called klezmers, traveled from village to village playing for weddings and other events. Amnon and his family came to Birmingham, a city with its own story of violence and repression of a people who loved music.

In April—the season of azalea, dogwood and redwood blooms—the restored violins were displayed and played by students and professional musicians. Youth who had been studying the Holocaust heard Amnon speak and the violins sing. Their voices honored those before, those who who had held them and loved them and drew beautiful music from them, those who had lived and those who had died. I expected to be touched by the music of the violins, and I was, but it was the words that gave shape to the music’s power—that explained the unexplainable.

Amnon’s wife, Assiel Weinstein, spoke at the commemoration of Yom Ha Shoah, Holocaust Remembrance Day. Though she did not play the violin, with ten words, Assi changed my understanding of the meaning of Israel. Assi’s father had been a partisan in Eastern Europe during the war, one of the famous Bielski brothers who escaped to the surrounding forest and waged guerrilla warfare against the Germans who were murdering the Jews of the villages and taking them away to death camps. At the same time, the Bielski brothers established a refugee camp deep in the woods, harboring those fleeing the Nazis, many of whom were old, weak and sick. Assi’s father, who was in charge of food and raiding parties said, “Let the Russian partisans do the fighting. It is more important to save one old Jewish woman than to kill ten Germans.” Hungry, sick, clinging to survival through harsh winters, the group became a community and kept their humanity. The movie Defiance was based on this historical event.

Toward the end of the war, in August of 1943, the Germans gathered soldiers to surround the forest, determined to flush out the partisans, the Bielski brothers and their camp of refugees.  Inexorably, they closed in. There was no escape. “All the people wanted to run in different directions,” but Tuvia Bielski, their leader said, “No we stay together. If we die, then we will die fighting, but we’ll do it together.”

Miraculously, two Jews, a forester and a peddler told the brothers that they knew a path through the swamp to an island. Hundreds of men, women and children followed them, as their ancestors had followed Moses, through the swamp to a small island where they hunkered down in absolute silence, waiting while the Nazis came closer and closer. For hours, they were still and quiet, even the children. Assi’s mother was among those who huddled, terrified, on the island, listening to the sounds of shouted orders and bullets flying overhead as the Germans searched all around them, certain they would be discovered and killed at any moment. But they weren’t. At the war’s end, 1,200 Jews walked out of that forest.

After the war, Assi’s mother insisted on immigrating to Israel. She told her daughter, “I came to Israel because I will never run again.”

I knew, of course, that people fled to Israel for safety, but those words were not those of a woman seeking shelter, but a place to fight from and to fight for. She would take her stand there. And with those ten words, I realized that is what Israel is, not a safe haven to hide, but a place to make a stand and a home for Jews, so they never have to run again.


Click here for a 1.5 minute video of Amnon and Violins of Hope