The primary focus of the weekend is writing. Usually silence reigns except for the clicking of Elisabeth’s keys, but there are lighter moments too. We reviewed the 432 pictures from Darcy’s photo shoot and picked favorites for book cover potential. Of course, we had to stage our own “shoot.”

This is our “thoughtful” pose. 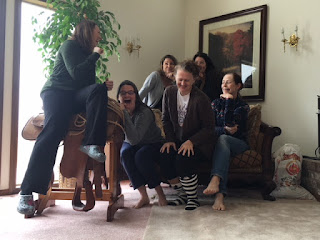 One of the most helpful things for me was the business discussion. We talked about goals for the upcoming year and mouths gaped as Darcy described her publication schedule. “I treat it like a job, because that’s what it is,” she explained. In order to meet her schedule, she sets—and meets—daily word counts.

Her comment echoed Steven King. I listened to On Writing during the drive to Portland. (We change the location every year, but the house is always in the Pacific Northwest.) King said he goes to his writing space every morning and doesn’t come out until he has at least 1500 words on the page. Some days he’s done by noon. Others, he’s there until dinner time.

That’s my takeaway from this year’s retreat. Consistency. Discipline. Sure, I wrote nearly 15,000 words this weekend. Some of them will turn out to be lousy, but the first draft of my latest novel is nearly complete and editing will deal with the clunky sections. But every day since I’ve been home, instead of checking email, social media, and the news when I get up, I write. I’m roughly two scenes away from reaching “The End.”

And then the editing will begin…and the plotting of the next book.

Thanks Darcy. And Steven.

She's hard at work on the next book in the Holly Price series,
In It For The Money.