During a recent cruise from Barcelona to Miami I asked the young Indian cook preparing my egg-white omelet, “Have you visited the US?”

“No, madam. It is my dream. But someday I will go. Where do you think I should start?”

Obviously, this isn’t a one-minute conversation (about the time for my omelet to cook). But we discussed the question at length over his next fourteen preparations of my breakfast.

“New York,” he said next morning, flipping the concoction in his skillet—a skill I’ve never mastered and told him so to let him know I’m not an expert in either flipping omelets or mapping out cross-country trips. “I think,” he continued, “Manhattan and Hollywood-Los Angeles must go to the top of the list, don’t you agree?”

Someone behind me interrupted, “I’d like to order an omelet now because I don’t want to miss the lecture on Columbus's discovery of America.”

So, my new friend and I tabled the question until the following day when I picked up our conversation. “Since you’re from New Delhi, I’d suggest places other than cities. Do you know about the Grand Canyon? Or Yosemite National Park? The Black Hills aren’t that far from Yellowstone or the Tetons ...”

A hungry passenger elbowed in next to me and announced, “I’d like two eggs over easy.”

When I commented to other passengers about this on-going conversation, they all had definite ideas of places to go and places to experience. None recommended NYC or LA.

By the end of the cruise, I still lacked a solid plan but suggested beginning in Washington, DC. From there, I recommended the Black Hills, adding he should see the Crazy Horse Monument before proceeding to Yellowstone and/or the Tetons.

Next, I advised, head south and west to Salt Lake City, veering off to The Grand Canyon. Afterwards, fly to San Francisco to walk across the Golden Gate Bridge. With any time, money, or energy left, I suggested flying to Seattle—maybe managing to hook up with a cruise ship destined for Alaska.

My new friend thanked me for my ideas, but I think he still felt the allure of NYC.

Yes, I recognize my itinerary leaves out huge swaths of our country, its history, and culture. I happen to love West Virginia and New Orleans. I know many would insist Mount Vernon and Monticello are a must for anyone visiting Washington. My preferences, Lincoln’s Tomb and Birthplace, probably do require too much travel off the beaten path. For me, they evoke more poignant memories than Washington’s and Jefferson’s plantations. I hope I conveyed the "real" United States is more than the East and West Coasts.

What do you think? Where would you send a foreign visitor with 21 days to see the USA?

******When AB isn’t lolling on trans-oceanic cruises, she lives and writes just off the fast lane in Silicon Valley. Her American Journey began in Southern Missouri, after which she lived in Bolivia, Kansas, North Carolina, Florida, and Argentina. Book 3 in The MisFit Series, The In-Between Years is now available from Amazon.  Look for Book 4, The Reckless Year on November 17—just in time for Thanksgiving. 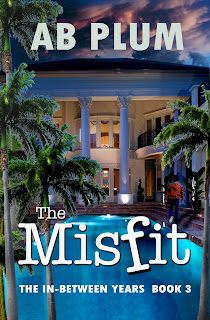