A Panel of Great Reads from Bouchercon by Debra H. Goldstein
When I’m asked to blurb a book or moderate a book panel, I have one nagging fear.  I’m petrified I’m going to hate the book.  It might be lack of plot, poor characterization, boring writing, or simply a topic that doesn’t interest me. My fear is even more intense when the panelists are well known names in the industry. So, you can imagine my level of panic when I discovered I’d be moderating the Hidden Secrets panel at Bouchercon featuring Heather Young, Michael Stanley (co-authors Michael Sears and Stanley Trollip), Mark Pryor, Laura McHugh and Louise Penny. 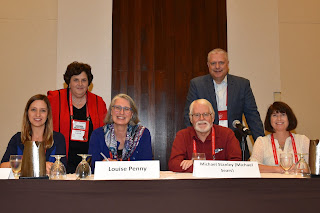 Once I picked myself up from the floor and sent them my standard “let’s get to know each other” e-mail, it was time to read their books.  I dreaded it, but what a wonderful surprise.  They were all excellent reads.  And, as I was to learn at Bouchercon, their authors were all wonderful people.


If you are a series reader, feel free to jump in with the one I read, but if you prefer to savor a series from its beginning, you’ll need to go back to their earlier books for Pryor, Stanley, and Penny. Young and McHugh have written standalones.


My recommendations without giving too much away (and in no particular order):


Mark Pryor – The Sorbonne Affair – a book in the Hugo Marston series – someone is spying on a famous author and the book quickly moves from surveillance to murder.


Louise Penny – Glass Houses – an Armand Gamache book set in the small village of Three Pines concerning a special kind of trial – one that includes conscience, regrets, and guilt.


Michael Stanley (Michael Sears was my panelist)– Dying to Live is a fresh slice of sunshine noir in which everyone from the main detective to the bad guy has a secret. 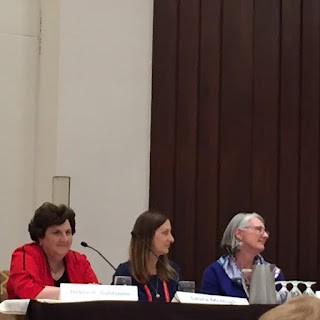