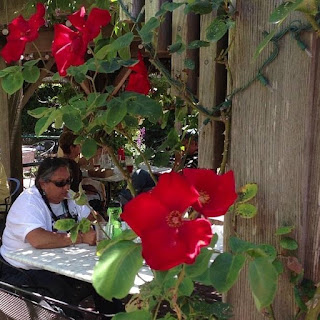 I've been under the weather for the last 24 hours, but here it is better late than never, I always say.


This story is a work of fiction. References to real people, events, establishments, organizations, or locales are intended only to provide a sense of authenticity, and are used fictitiously. All characters, incidents, and dialogue, are from the author’s imagination and are not real. I’m just sayin’.


I am the family genealogist and historian. I know about secrets.  People feel a need to tell me their secrets and then ask me to keep them secret. I do. But since Mom, Dad, Victor, Barbara, and Gracie are all deceased, I decided to investigate the chisme all the viejas were whispering behind their age-spotted hands and get the facts.


The fact is my Mom and Dad were each other’s true love. My Mom and Dad met in the early thirties when she was eight- years-old. Her oldest brother, Ziggy, was best friends with my Dad and brought him home to meet his mother, brother, and two sisters.


My Mom and Dad crossed paths years later  after WWII when my Dad came home on a ship and my Uncle Ziggy came home in a coffin. Uncle Ziggy was so dark skinned they labeled him as a black man on his death certificate. He was indigenous of the Southwest: Apache/Navajo/Ute and or some combination of dark skinned Indians from Áztlan, the mother land.


My Mom is the reason I became a criminal investigator. I document with photos and stories. I interviewed many of my family members. My mom refused to finish her recorded interview because it was too painful. The past had hurt her and she had no desire to revisit that time. I asked my siblings about the past and they couldn’t remember much because they were too young. I pieced together the details and then began my investigation.


I drove to my hometown and visited the local family history center. I scanned microfiche for hours until I came across the headlines in the local paper on August 8, 1945. As I continued to read the next week’s newspaper, I read about the crime, the arrest, and the sentence.


My Mom had been stabbed numerous times in the abdomen with a switchblade. My Dad’s oldest daughter, Gracie, committed the attack while her mother, my Dad’s ex-wife, Barbara, held my mom down. My mom survived because she is half Indian and mean as a hawk. If she had died behind that honky-tonk in the alley, I would never have been born. The family secret was kept for fifteen years. Until one day in 1972.


It was a windy Autumn day when you have to wear a sweater but not a coat. The blue sky was filled with clouds. A storm approaching. The birds scattered high in the trees and squawked loudly. They beat each other with their immature wings. I could smell the rain in the air and opened my mouth to catch the first drops on my tongue. My life was about to get twisted.


I was known as the chick with the hair. Boys fell in love with my hair and wanted to date me, but I was too busy partying to give up my freedom. I went steady with a couple of guys in high school, but I never slept with any of them. Except I can’t remember much from that time in my life, so it’s possible I did and don’t remember it.


That day the attitude of my friends was just like every Friday after school: Restless, anxious, adventurous. But I do remember the day I met Vick.


Have you ever had someone call your game and say, “Just who the hell do you think you are?” Have you ever thought what your answer would be?


The story I’m about to share with you is about the time a stranger approached and asked me, “Do you know who I am? I know who you are. Your dad is supposed to be my grandfather, but I don’t claim him.” She stomped off in her desert boots and left a trail of dust on the high school track field. She was with a mutual family friend, Laura.


I called Laura over to where my gang was hanging and asked her, “Who the hell does she think she is?” And then the secret was revealed to me. Vick was my niece. Her mother, my half-sister, Gracie, had stabbed my Mom and gone to juvie for a couple of years for assault with a deadly weapon, a switchblade. Vick’s grandmother, Barbara, was my Dad’s first wife and was the one who held my Mom down on the ground while her daughter tried to kill her.


I had never heard about nor seen my half-sister, Gracie. We’d never met. Vick was visiting Laura in my hometown; throwing fighting words and daring me to kick her sorry ass. We were fourteen-year-old cholas trying to mark our territory.


Life in Tortilla Town was so segregated that cousins were marrying their cousins. My Dad married his brother in law’s ex-wife. There were six children between them. My Mom’s kids were teenagers when my Dad came to live with them. They had always called him Uncle Mack. They refused to call him Dad, instead they called him, Mack. My Mom added a one-year-old son and six-year-old daughter to her family when she married my Dad and he was given full custody of his two youngest children. And remember this was 1950’s family court.


My Dad never met his three granddaughters. So here was one of those granddaughters, Vick, in my face trying to start a fight on a Friday afternoon in the shade of the Elm trees behind my high school. We were sitting in the bleachers of the track field when she approached me looking all bad ass. She was from the town down the road.


Confused? If you aren’t confused, you are scratching your noggin trying to figure out why? Why did my half-sister stab my Mom? The headlines in the local paper named everyone involved, except for my half-sister, because she was underage, but she went to jail for attempted murder for jumping my Mom in the alley behind the honky-tonk on the hill, aided by her mom, Barbara. Gracie went to juvie and my Dad disowned his oldest daughter for trying to kill my Mom.

Gracie asked my mom, “Tia, can you forgive me for trying to kill you?” My Mom said no. Gracie died unforgiven. I feel sad that my Dad never saw his daughter again. Bad blood. Shakespearean tragedy. Switchblade secrets. Attempted murder. Hatred. Sadness.


If my Mom had died that day, I wouldn’t be here to write their story. My Mom and Dad married and raised their five kids together and had four more kids and many grandchildren, great- grandchildren and great-great grandchildren.


So by investigating their story, I unveiled the tragic facts. My half-sister went to jail for trying to kill my Mom. But the story does not end with my Mom and half-sister. The story ends when my half-brother, Richard, friended me on Facebook and led me to our niece, Vick, Gracie’s oldest daughter. Today Vick and I are friends on Facebook. We’ve forgiven the mistakes our mothers made and gone on with our lives as family. I am her Aunt. She is my Niece. Even if only on Facebook in the virtual world. Technology has relinked our lives.