Coming out of my comfort zone 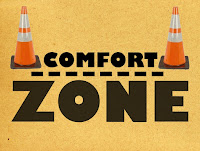 I’ve recently attended my sixth Malice Domestic Convention where I had a great time. I came out of one comfort zone when I first attended this conference and stuck like glue to my friend who convinced me to attend. Also, I was traveling all alone to the unknown where I only knew the one person. Six years later, I’m all over the place and I like it.

The following year, I attended my first Bouchercon in St. Louis and once again, I was going into the unknown, traveling to a city I’ve never been to and knowing only a few people. I had a good time and there were moments where it got overwhelming with the crowd that I had to escape to my room. Again, coming out of that comfort zone.

At the Albany Bouchercon, I was asked if I wanted to be on a panel and my immediate answer was “no.” Going forward one year and at the Long Beach Bouchercon, not only was I sitting on a panel, but I was also moderating a panel for the first time. Talk about double anxiety. I was a nervous wreck right up to me sitting on the panel and then moderating one the following day. Again, coming out of that comfort zone.

When I attended Bouchercon Raleigh, there was a comfort zone I was not sure I could do and I’m happy that I didn’t have to address that one.

In February, I headed to Phoenix to attend my first ever Left Coast Crime convention and once again, I was moderating a panel and sitting on a panel and yes I was nervous, but once again, I’m coming out of my comfort zone.

And early in the month, I moderated my first panel at Malice Domestic and yes, I was nervous, but I was better prepared for all that needed to be done and it helped that I had met most of the panelists at other author events. Once again, coming out of that comfort zone.

Next year I tackle another comfort zone, traveling direct (11 hour flight) to Hawaii and I’m thinking I want to wade in the waters in Hawaii. If that is accomplished, that is a BIG coming out of my comfort zone.


So readers, have you come out of your comfort zone and done something you never thought you would?