The Year of the Short Story

Like Debra Goldstein, I’m a writing conference junkie. I completely understand the attraction that compels so many sci fi and graphic novel enthusiasts to flock to cons. First, you’re surrounded by people who have as great a love of the subject as you do, and second, you draw inspiration from proximity to the practitioners.

I’ll never forget my first visit to Malice Domestic about fifteen years ago. Everything about it seemed to spell impossible expectation. The time of year. The distance to travel. Getting leave from work. Arranging for my mother to travel with me. Yet, Mary Higgins Clark would be there, and I was obsessed with her books. When I imagined my future, it was writing novels like Mary Higgins Clark’s.

Somehow, all the pieces came together. Impossibility became reality. I went. Standing in line to get my picture with Mary Higgins Clark, I met Dana Cameron, who has become a wonderful, supportive friend. The photo with Mary Higgins Clark and her daughter Carol Higgins Clark has become a talisman for me, a symbol of what I can achieve. When one of my relatives asked who those people were (not recognizing me), I convinced myself I looked enough like an author to be mistaken for one. I’ve continued that happy delusion ever since. 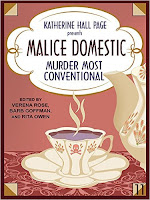 I dub this year’s Malice “a celebration of the short story.” Malice revived its tradition of publishing anthologies with Malice Domestic’s Murder Most Conventional, with twenty two original stories and one reprint all set at conventions. (Another anthology is planned for next year featuring historicals.)

While I missed lunch with the Guppies, I had a wonderful time with Debra Goldstein, Barb Goffman, and others. Barb won her first Agatha this year for “A Year Without Santa Claus,” her first publication in Alfred Hitchcock Mystery Magazine.

At the SinC Breakfast, the announcement of a new initiative, “We Love Short Stories,” organized by Debra Goldstein, was met with applause and great expectations. 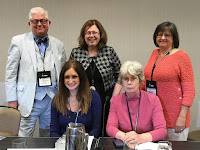 I thoroughly enjoyed being on a short story panel with James Lincoln Warren (a first class moderator who brought his panelists California wine), Teresa Inge, K.B. Inglee, and Jayne Ormerod. We missed being with Eleanor Cawood Jones, a contributor to the new Malice anthology, who had became ill. During our discussion time, we explored the diverse themes, characters, and settings for mystery short stories. Jim kindly read selections from each panelist's stories to the audience.

At the banquet, so many attending had backgrounds as both short story writers and novelists. Terrie Farley Moran, who won an Agatha for best first novel last year, was nominated in the short story category this year. B.K. Stevens, who broke her arm and sadly could not be there, had a table full of supporters, cheering her nominations for short story and young adult novel. (Notice in the photo below that B.K.'s daughter Rachel and publisher Carla Coupe are holding up Her Infinite Variety, a new collection of B.K.'s short stories.) I had the pleasure of celebrating with Art Taylor when his novel in short stories, On the Road with Del and Louise, received the teapot as best first novel.
﻿ 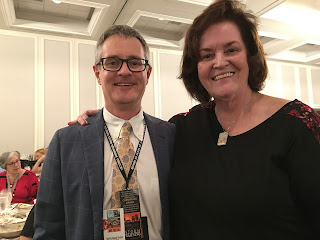 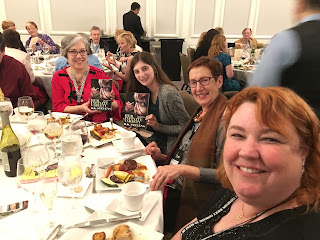 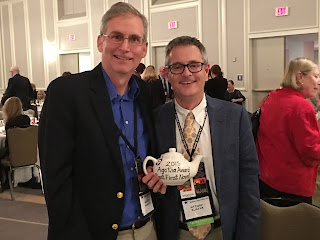 ﻿Hurray for another wonderful Malice and double hurray for the recognition of the importance of the mystery short story. It's going to be a wonderful year for reading!