Donna Leon is the author of 24 books in her mysteries series set in Venice, Italy. They feature an Italian policeman, Commissario Guido Brunetti , as he maneuvers among governmental corruption on all sides and tries to bring justice to a land where few people expect it. Although Leon is American by birth, she has lived in Venice for decades and knows the city well. Her books are especially popular in Germany, Switzerland, and Austria. Although translated into 20 languages, her work is not available in Italian because, she says, she dislikes being recognized when she is in public and considers it an intrusion.
﻿
Much of the charm of reading Leon’s police procedurals comes from immersion in another world so different in small ways from American or British policing. Brunetti is of a philosophical bent, returning home to read the classical greats of Roman literature to soothe his soul after viewing the worst that human nature can do. At his apartment on Calle Tiepolo in the San Polo district of Venice, he holds long discussions about life, literature, and various absurdities of the modern world with his wife Paolo, a professor of literature at the local university, and their two teenaged children, Raffi and Chiara. None of these reoccurring characters age in these books. The first was published in 1992, Death at La Fenice, and the most recent was published this year, Falling in Love.


Fans of slam bang thrillers may find these mysteries a bit languid. For me, however, they offer a visit to a charming city that reeks of art and antiquity. Brunetti understands human nature and is often sorrowful when he uncovers the motives of killers. He dislikes the moneyed elite that has run Venice for centuries, even though his wife Paolo is a daughter of Count Falier, who lives in an elegant historic palazzo on the Grand Canal. Paolo would like nothing better than to sit all day reading and rereading the tomes of Henry James. Occasionally she too goes on a rampage for justice. She is no spoiled rich daughter, despite her being from ancient aristocracy.
I was once blessed to meet with Donna Leon when she visited Houston for a book talk. Sitting by her side at lunch, I was delighted to soak up her upbeat spirit she maintains despite the gloomy view of human nature evident in her books. When asked about how she displays justice in her mysteries, she stated that she believes Italians have no illusions, that they expect all politicians to be corrupt. That given of Italian life she believes is “refreshing.”
The interplay among the big personalities in Guido Brunetti’s office is fascinating. His boss Vice-Questore Patta dresses in Armani, hails from the crooked and Mafia-ridden south, and lunches daily with Venetian bigwigs.  He may be shallow, vain, and a climber, yet he is not all bad, nor is he evil. Patta’s secretary Signorina Elettra left a lucrative financial job to employ her computer wizardry for serving justice, and Brunetti never hesitates to ask her to hack into someone’s bank records. The morals in these books are a little slippery, yet there is a consistent decency to the actions of Brunetti, his family, secretary Signorina Elettra, and Brunetti’s friend on the police force, Vianello. An air of sad resignation and melancholy resides in the pages of these unique mysteries.
If you have not yet discovered the books of Donna Leon, I recommend them to you. You will learn much about the fascinating and labyrinthine world of Venice, both the high life and the low, and of human nature and all its dark foibles. Her books have inspired my writing because they delve into philosophical and moral questions as well as present a richly detailed account of a famous city. When I finally visited Venice three years ago, I felt I understood it better because of Donna Leon’s writing. I have read all 24 books to date and look forward to the next in 2016. The only thing that makes me turn green with envy is when Donna Leon says she never does rewrites.
~~~~~~~ 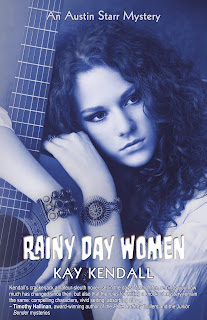 Kay Kendall is a long-time fan of historical novels and writes atmospheric mysteries that capture the spirit and turbulence of the sixties. She is a reformed PR executive who lives in Texas with her husband, three house rabbits, and spaniel Wills. Terribly allergic to her bunnies, she loves them anyway! Her book titles show she's a Bob Dylan buff too. RAINY DAY WOMEN published on July 7. It is the second in her Austin Starr Mystery series. The audio-book will debut soon.
http://www.amazon.com/Rainy-Day-Women-Mystery-Mysteries-ebook/dp/B00W2X5SCS