A Clock by Any Other Name 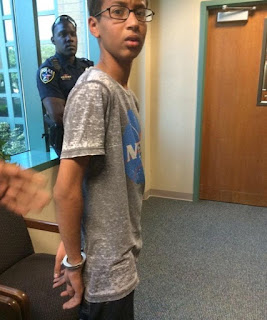 A Clock by Any Other Name

I imagine most of you reading this will have seen the news stories about Ahmed Mohamed, the fourteen-year-old boy who built a digital clock in a pencil case and brought it to school to show his teacher, only to be handcuffed and publicly perp-walked out of school to a juvenile detention center where he was fingerprinted and detained for hours. This led to a huge social media outcry with #IStandWithAhmed trending on Twitter and an invitation to bring his “cool clock” to the White House to show the President.

This really struck home with me. My oldest son, Niles, was a kid much like Ahmed. When he was little, I used to go to the thrift store and buy old radios and small appliances for him to take apart to see how they worked and try to put together again. It beat buying new appliances for our home when he tried the same on our small appliances. Niles blew the lid off the Iowa Basics in math and science when he was in the fourth grade. His scores were the highest in the nation, and the testing company thought he’d been helped by his teacher, so they sent a representative to give him the test all over again. His scores were even higher that time.

Niles was always tinkering or building machines, appliances, and electronic apparatuses. In high school, as computers became more important in the schools (this was back in the 1980s), one of his teachers pulled him into that field and made him an assistant teacher because he took to it so well. Niles went on to study computer science in college—after an interruption for Desert Storm—and was recruited by the major American firm designing and installing comprehensive hospital system software packages. He immediately became one of their top troubleshooters and traveled the country, even went to the United Kingdom to help with initial rollouts there. He was hired away by St. Jude’s Hospital in Memphis, which is a teaching and research hospital for children facing cancer and other dread diseases. He ran their system for seven years and still does consulting work for them.

Now, my son has his own consulting company with employees. He’s in high demand at large medical complexes, such as the Stanford Medical Center, UCLA Medical Center, a consortium of Detroit hospitals, and many other places. He’s quite successful, and a couple of years ago consulted me about setting up his own small foundation to fund the creation of educational software packages for inner-city and other disadvantaged schools.

The reason I’ve bragged so shamelessly about Niles is not just because I’m proud of him—I am—but because if the atmosphere of the country when he was in school had been filled with the artificial fear that has been pumped into it today, he could well have been another Ahmed. He’s brown-skinned with black hair and dark eyes and a dreaded Hispanic last name (though his ancestors have been born in this country clear back to before it was a country). I could easily see the boy I loved and raised in Ahmed, that eager mind, the excitement about managing to build something new and make it actually work, even the NASA T-shirt.

Software innovations my son helped design make it harder for nurses and doctors in hospitals to accidentally give the wrong medicines to patients and make it easier to integrate all the information about one patient from all the different departments of a hospital and different doctors into one accessible-to-all file to keep everyone involved in that patient’s care literally on the same page. Now, he’s also giving back to help educate new generations. This is what happens when we, as a country, are not blinded by xenophobic rhetoric and artificial fear ginned up by politicians for their own selfish purposes. On this day--my son's birthday--I hope we can get back to the kind of country we were when my son was able to take several inventions to school to show his teachers without getting arrested as a menace to society.
Posted by Linda Rodriguez at 12:30 AM