The Good, the Odd and the Ugly of a Library Event

Actually the event itself was great. 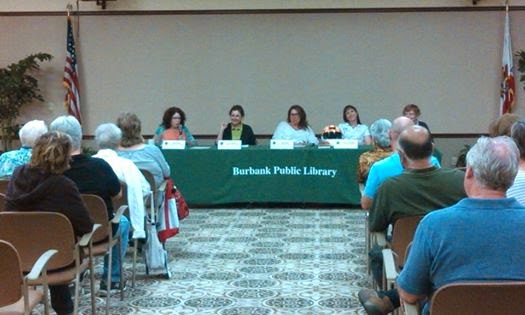 The Burbank Library has a wonderful meeting room--and they made beautiful flyers which they'd been handing out to patrons. And refreshments were furnished--and enjoyed.

We had a wonderful moderator, and a great group of panelists, all members of the L.A. Chapter of Sisters in Crime.

Here is where it gets odd. After we all chimed in on what constituted a cozy, we realized none of our books really fit the criteria.

The cozy is supposed to have an amateur sleuth. In both of my series, the sleuths are professionals in law enforcement. Both are set in small towns--another criteria.

None of that really mattered though because we had a good time and so did the audience.

Because I am a member and never get to participate in much with this chapter, I agreed to be on this panel even though I live far away (a 3 hour drive.) Not wanting to turn around and come home afterwards, I booked a hotel room in a place that was near the library. No longer driving in L.A. or at night, I talked my middle daughter into being my driver.

This is where the odd and ugly begin. The first room we were given had not been serviced. The linens were not clean at all. Called the desk and the manager brought us a new key for the room next door.
It needed to be vacuumed, but the bed lines, though dingy, were clean.

Though the event was at 7, we decided to leave at 6 just in case we ran into traffic or got lost. I put the address into my GPS and we laughed when it told us we were only 1 mile away from our destination. A good thing we left at 6--the GPS took us up the hill, over a bridge, to the left, to the right, back over the bridge, down the hill, on another long street and finally to our destination and we got there at 6:30 p.m. Good time to get set up and meet my fellow panelists.

One funny thing, the panelists really wanted to know what the F stood for in F.M. Meredith. I didn't tell them, though I did give them the clue that it was an old-fashioned name. they had a lot of fun trying to solve the mystery, coming up with many, many names beginning with F.

Later I received an email from the moderator who guessed the right name. And no, I'm not going to tell you what it is.

After the panel, we headed back home, this time it only took about 10 minutes.

We settled down in our room, watched a little TV and went to sleep.

I woke up to my daughter looking out the window and saying, "This is our room." Someone had a key and was trying to get in. They finally left.

Back to sleep. Again someone woke us trying to use a key to get in.

Both times the key worked, they didn't get in because we had the night latch on.  This time we called the front desk. Of course it had something to do with the manager not changing our room assignment.

It wasn't easy to go to sleep after that.

When we woke in the morning we decided to try Frank's Coffee Shop which was on the premises of the hotel. It turns out that this cafe has been used for several movies. 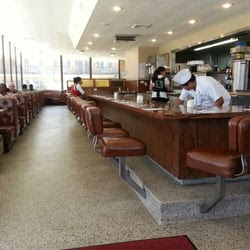