I once read a post in which the author quoted a research study that concluded it takes about a million words for a writer to get any good at writing. (Although, why anyone would possibly want to research something like that is beyond me.) In other words, you have to write at least a million words before you can expect to sell your first book. And I can only assume that they mean you have to write these words in the form of a novel, or whatever type of writing it is that you are trying to get good at.

Oh, come on! They expect me to write a million words? An average novel's only about 70,000 to 80,000 words, if that. So let's see. I've never excelled at math, but if my calculations are correct, I would have to write around thirteen novels in order to sell the first one. I don't think so! Yes, I know that writers get better at writing by writing. That's pretty much a no-brainer. Practice makes perfect, and all that. But, really, a million? That's a lot of words. Could I really have been that bad when I first started? I'll admit that the first novel I wrote is still in the bottom of my sock drawer, which is probably where it's always going to stay—unless I get really brave and shred it. And that first novel was so much work. It's awful, I don't deny it. And when an author tells you that a novel they wrote is bad, believe it. When you spend that much time, energy, blood, sweat, and tears on something, you want to love it. You want to crow to the world about how great it is, even if it isn't. But if you're honest, when it sucks, you admit it. And I admit it sucks.

But I learned so much from that first novel. Just actually finishing it was a major accomplishment! Then I ponied up the money and sent it to a first-class book doctor I met at a writer's conference. He was expensive, but very good—and very honest. And while he praised what he could, which wasn't much, he pointed out my mistakes and told me how to fix them. That novel wasn't worth salvaging, or so the book doctor said. In fact, his exact words were "Scrap it and start over." So into the sock drawer it went. But my second novel was better. A lot better. I still had a great deal to learn, as it turns out, which I discovered when I sent that novel through a critique group. For one thing, I found out that it is very difficult for an author to see his/her own mistakes. From typos to plot flaws and inconsistencies, you need someone to read it and point out those mistakes. The author is too close to the work to see the flaws. At least I was. If you can find a good one, critique groups are wonderful tools. Since I live out in the boondocks (you'd think that with as many people who claim to live in the boondocks, there'd be more authors close by), the closest local writing group was about 150 miles away. And that's one way! So I joined a free online critique group. They were fantastic. They pointed out big and little mistakes (that I should have seen but didn't) and taught me a great deal.

When I finished running the novel through the critique group—thinking I was done, silly me—I sent it to an agent, who rejected it, and again, pointed out several mistakes, although she did say that she loved my writing, which was something at least. That novel was at least salvageable and, between the critique group and the agent's advice, I was able to revise it well enough to finally get it published. But even then I wasn't done. Little did I know that just because you've finished the book, sold it, and signed a contract with a publisher, that doesn't mean you are done. Oh no. You still have to deal with the editors. And editors edit. They not only catch your typos, but they point out plot inconsistencies, wordiness (I hate it when that happens), grammar and punctuation errors, and other common—or not so—mistakes. Luckily, I had great editors with keen eyes and even keener insights. They didn't let me get away with anything. And when it was finally done, it was something I could crow about and not feel dishonest.

So far, I have sold five books—one novella and four novels, the latest of which, Black Ops Chronicles: Dead Men Don't, came out in June—and I haven't even reached half the quota the research study came up with. And I'm not sure I'll ever get there. While most authors write because they can't not write (at least that's why I do it), I don't know many who actually enjoy the process of writing—staring at a blank computer screen, wondering how the hell to say what you need to say to tell your story; characters that don't do what you want, or expect, them to; spending hours on a difficult scene, struggling to find the right words to convey the action that you can see so clearly in your head but not translate onto the page; having to go through and really, honestly, and harshly evaluate then delete all those cute and clever phrases that you just love but that don't really add anything to the story; revising, revising, revising, and then revising again, before you have something even half-way ready to submit; and then when you think you're finally done, the editors get involved, and you have to revise again.

Even so, I wouldn't trade it for any other profession, despite the fact that I often feel like Eliza Doolittle in My Fair Lady when she sang, "Words, words, words…I'm so sick of words!" But will I ever reach a million? Only if I come back as a writer in my next life, too. Do you think those words will count?

A strange man has come to save her...but is he friend or foe?Anderson Merritt’s been kidnapped, but when a stranger comes to rescue her, she isn't sure he is who he says he is. He claims to work her father’s boss. But someone close to Andi set her up, and now she doesn't know who to trust. Every man she’s ever known has seen her only as a tool to get to her father or his money, so why should this one be any different? As the sparks between them ignite, and the danger escalates, Andi has to choose—go off on her own, or trust that some men really are what they seem.

He doesn't want to hurt her…but he may have to if she doesn't come willingly.Ex-CIA black ops specialist Levi Komakov doesn't believe in hurting women, but when the place is set to blow and Andi won’t cooperate, he has no choice to but toss her over his shoulder and carry her out of danger, determined to keep her safe in spite of herself. But the beautiful little spitfire doesn't make it easy for him. With her abductors seemingly always one step ahead of him, Levi suspects there's a rat in the woodpile, but who? Could it be someone close to Andi's father, someone in the FBI, or someone in the family Levi works for? When a new threat appears, and even the CIA can't help him keep Andi safe, Levi puts everything on the line—but will it be enough? 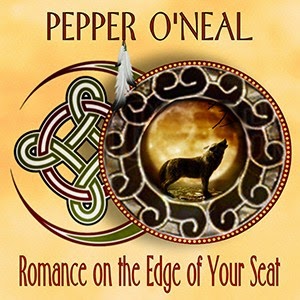 Award-winning author, Pepper O’Neal is a researcher, a writer, and an adrenalin junkie. She has a doctorate in education and spent several years in Mexico and the Caribbean working as researcher for an educational resource firm based out of Mexico City. During that time, she met and befriended many adventurers like herself, including former CIA officers and members of organized crime. Her fiction is heavily influenced by the stories they shared with her, as well her own experiences abroad. O’Neal attributes both her love of adventure and her compulsion to write fiction to her Irish and Cherokee ancestors. When she’s not at her computer, O’Neal spends her time taking long walks in the forests near her home or playing with her three cats. And of course, planning the next adventure.
Posted by The Stiletto Gang at 5:00 AM