Passion.  Aging.  Wanting to fulfill my passion to be a writer (even a mid-list writer) before my arms go beyond their present flabby state.  These are things I’ve been thinking about a lot lately because of a wonderful award I received on July 31.  Positive Maturity, a United Way agency in Birmingham that addresses issues associated with senior citizens, in partnership with the city of Birmingham and B-Metro Magazine, honored an inaugural class of fifty individuals based upon their achievements in business, personal life and civic engagement.

Besides being 50 or older at the time of the event, the honorees must have demonstrated success in one of the following areas:  current career (including encore careers), civic engagement, personal goals such as training for a marathon later in life, or beginning and succeeding at a new career based upon a lifelong passion.  When I learned the 2014 winners would include University of Alabama Coach Nick Saban and 2011 James Beard Who’s Who of Outstanding Chef Frank Stitt, I was appreciative and a little unbelieving that I was included in their company. 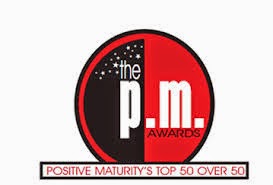 In other words, someone goofed.  True, I have been active in the community and there were some pretty high highs in my legal career, but I’ve always tried, and for the most part succeeded, in flying under the radar. I thought about saying “no,” but three things made me agree to be an honoree:  1) to be a part of a fundraising event for an agency that does so much good; 2) that my son informed me that he would fly in from Chicago to attend the event – “oh, and do you think you could arrange for me to get a picture with Coach Saban?” and 3) when I was told I had been selected as the poster child for my success as an individual who walked away from a well-paying cushy judgeship to follow a lifelong passion – my dream to be a writer.

It didn’t matter to the nominating committee that my first book, Maze in Blue, failed to make the New York Times best-seller list.  They thought the weeks it spent on Birmingham’s best-seller list, how it engaged members of the public, and the support various community groups received from my book signings and talks was more important.  The selection committee didn’t look to see how the book was published by now defunct Chalet Publishers, LLC, kept alive through a Creative Space edition, and then purchased and published as a May 2014 Harlequin Worldwide Mystery book of the month.  Instead, the committee looked at the pure joy I have had being a writer of short stories, essays and what I hope will soon be two novels.  They chose to recognize the passion that consumes me.

Writing isn’t an easy path.  I marvel more and more at the writers I meet and their personal stories.  One thing those at the top of the pinnacle, the mid-list writers, and the wannabes like me have in common is our passion.  There are many other things we could do with our time – perhaps performing those things far better than we write – but we can’t help ourselves.  We have to write.  Our writings aren’t always pretty or perfect, but they are expressions of thoughts we must share.  It hurts when others reject our writings, but we simply put our efforts into a new project.  We can’t turn off the passion.

I was proud and humbled to be a 50 Over 50 award recipient. I am prouder to be part of the passionate group who make up the writing community.