The Case for It's

Recently, I was ranting on Facebook about my hatred for the periods in a.m. and p.m as well as the comma between city and state in addresses (see what you miss by not being my Facebook friend?) and one of my friends posted a link to Weird Al Yankovic’s new song "Word Crimes.”  As a long time Weird Al enthusiast and a Facebook friend to several editors and writers I had already seen the video (click here if you haven’t).  The video parodies “Blurred Lines,” Robin Thicke’s insanely catchy hit from 2013.  If you haven’t heard that one, then you probably weren’t living in America all of last year, but here you go – Blurred Lines.  (Warning: may not be suitable for work and my cause you to get in arguments with your feminist friends over whether or not the song is “rape-y”.  Double Warning: If you use the word rape-y at me, I will smite you.)  But back to the story, as I watched the Weird Al version again (because why wouldn’t you?) I was caught by the line “You do not use “it’s” in this case!” 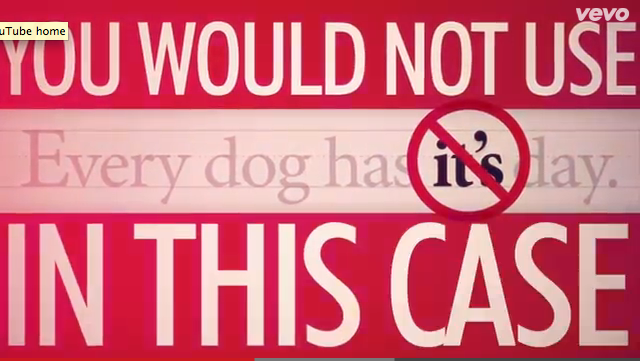 But why don’t we?  Yes, yes, the current rules state that “it’s” is a contraction.  “It” is not possessive; “it” cannot own anything.  But I say, “Listen up English – if you’re not going to provide me with a gender neutral pronoun, why can’t I use the defacto pronoun already in use in conversation – it?”  Clearly, the language is lacking such a word. English should stop being stuffy and allow this clearly needed possessive to enter the dictionary.  I’d willingly delete "tweep” from the Oxford-English Dictionary if I could have “it’s.”  Who’s with me?

Bethany Maines is the author of the Carrie Mae Mystery series and Tales from the City of Destiny. You can also view the Carrie Mae video or catch up with her on Twitter and Facebook.