Maybe It Was the Water?

Maybe it Was the Water?
By Laura Bradford

Honestly, I have no idea what's come over me the past two and a half months, but whatever it is, I like it. A lot.

Something about this year's Malice Domestic Conference lit my reserve tanks like no conference has ever done before.

Sure, I'm been "motivated" after other writer events over the last almost 10 (gasp!) years, but it's a fire that usually runs for a week (at best) before procrastination rides to the rescue with its trusty extinguisher.

This year's fire started at the conference (May 1st) and it's still burning bright. In fact, since I rolled my suitcase out of the hotel and hoisted it into my car on the last day of the conference, I've written (and sold!) a new mystery proposal, and typed "The End" on a 75 K because-I-want-to manuscript I started plotting in my head two years ago (yet, prior to May, had only written one chapter).

It's almost like there was something in the water that chased away all signs of anything resembling procrastination lurking inside my brain.

In fact, it (whatever "it" is) has worked so well, I almost wish I could bottle it and sell it (you know, in case the 75 K because-I-want-to manuscript turns out to be the what-the-heck-were-you-thinking manuscript during the re-read phase...). 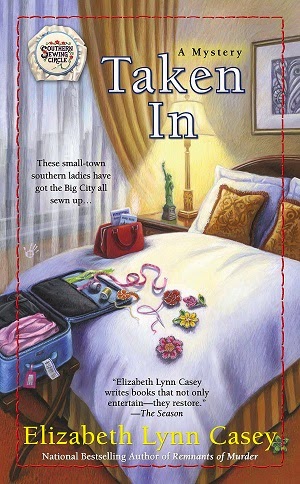 Oh, and in case you think heavy doses of chocolate has had something to do with this 2 1/2 month long phase that just might not be a phase at all...I can honestly say, no.

So hip, hip hooray for the motivation and the added helping (or fifty) I got at this year's Malice Domestic Conference!

And hip, hip hooray for the upcoming release of TAKEN IN--the 9th book in my Southern Sewing Circle Mysteries--on August 5th. I'm officially excited for my readers to get a hold of this installment. It's a hoot!

Posted by The Stiletto Gang at 2:38 AM