The French have an expression for someone like me—“a woman of a certain age.” I like to say I’m at the leading edge of the baby boom…and you can do the math. Yet, both expressions underscore the fact that I was a freshman in college 50 years ago, when President Kennedy was assassinated.

I was at lunch in my dorm cafeteria when someone ran in, screaming that JFK had been shot. Many of us rushed off to view the one TV set for 300 young women.Then I threw over my Friday afternoon classes in favor of sitting in my dorm window and watching for my roommate Carole to walk up the street. When she did finally arrive and saw me in the window, we exchanged mournful looks. I can put myself there still. Visualize that window. Carole in her fall jacket. The eighteen-year-old I once was.

The Houston Chronicle solicited its readers’ memories of where they were on that dreadful day and published many of them today. Here is the one that I found to be the most moving:

I am a retired Delta Airline pilot, and I was on my trip from Hobby (Airport) to New York on November 21, 1963. I was about halfway to New York when the controller told me I could not change altitude because Air Force One would be passing under me southbound. I saw him coming, and I asked the pilot how they were doing. He said, "OK, just fine." I asked him how his "first-class passenger" was, and he said, "Just fine, looking forward to going to Texas."
The next day, I was flying back to New York. When I was taxiing to the runway, I was told JFK was shot. We were about halfway, when Air Force One came on the radio, saying they were going to Washington. It was the same pilot, and he could hardly talk.
Jim Shannon, Houston 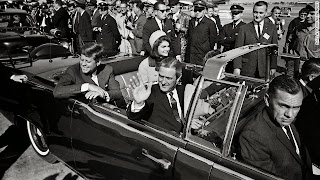 Oceans of water have gone under the bridge of time since that assassination. Millions of words have been written about it—perhaps even billions—and still that day and that event resonate with those of us who will always remember where we were when we learned the sad news. Unfortunately, there have been other bad events that stick in our minds in a similar way, but none seem to conjure a loss of hope and innocence the way a shotgun blasting at a forty-six-year-old charismatic President of the United States did.

Where were you? What do you most remember about that time?
Posted by The Stiletto Gang at 9:45 AM