From Idea to Finished Product

One late night at a McDonalds, a group of writer friends sat chatting after a book signing. As the evening wore on, the subject of how we start a book came up. (Yes, writers are a wild sort. I even had chicken nuggets to snack on while we talked.)

For me, it’s setting. My bull rider series is set in a little fictional town based off a real small mountain town nestled in the Idaho Mountains and the site of the first local rodeo of the season. I wrote a book about a woman who didn't know her witch heritage set in a bar that has an uncanny resemblance of one where I spent many a night playing darts.  And I have a story floating in my head that starts with a lonely dock in a secluded cove on a lake near McCall, Idaho. The place just radiates magic.

It probably won’t surprise you that Guidebook to Murder started with a picture--one I shared with you in my introductory post. I love the way the fence is part wood and part wire.  The cheerful yellow and white paint contrasting against the dead tree and overgrown yard.  The place spurred a question or two - Who would live there? Why is such a cute house in such bad shape?

And when writers have questions, we fill in the blanks with story. 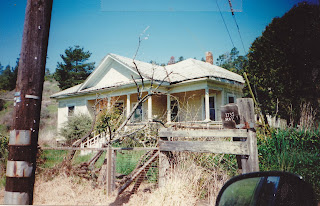 I took this shot one spring break while I was vacationing at my sister’s house in central coastal California over a decade ago.  This became the touch point for Miss Emily’s house in Guidebook to Murder.  And now, the entire town of South Cove has been built around the idea.

That one picture spurred the series.  But now I have a new picture to share for South Cove.  Guidebook to Murder, Book 1 of the Tourist Trap Series is available for pre-order on fine digital stores everywhere. Can’t wait for April when you all can visit South Cove too. 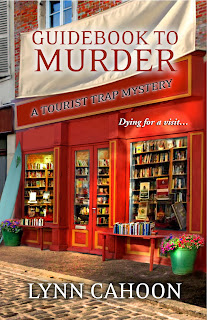 Which leads me to my question –do you read books because of the setting?
Lynn

In the gentle coastal town of South Cove, California, all Jill Gardner wants is to keep her store--Coffee, Books, and More--open and running. So why is she caught up in the business of murder?


When Jill's elderly friend, Miss Emily, calls in a fit of pique, she already knows the city council is trying to force Emily to sell her dilapidated old house. But Emily's gumption goes for naught when she dies unexpectedly and leaves the house to Jill--along with all of her problems. . .and her enemies. Convinced her friend was murdered, Jill is finding the list of suspects longer than the list of repairs needed on the house. But Jill is determined to uncover the culprit--especially if it gets her closer to South Cove's finest, Detective Greg King. Problem is, the killer knows she's on the case--and is determined to close the book on Jill permanently. . .
Posted by The Stiletto Gang at 12:30 AM