I don't have a cover yet, but the the title is Dangerous Impulses. This follows No Bells which centered on Officer Gordon Butler, whose romantic interest is the major suspect in murder case. He risks his life and his job to prove her innocent.

For those who might be interested in catching up on the series, my whole idea when I wrote the first one, was to show how the job of being a police officer affected the family and what was going on in the family affected the job.

When I wrote, Final Respects, I had no idea it would be the beginning of an on-going series. 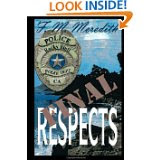 When I'd finished writing, I realized that I wanted to know more about these people who lived and worked in the small southern California beach community of Rocky Bluff.

Though the characters continue, different ones have starring roles. In Bad Tidings, Lt. Gilbreath often has to be the bearer of bad tidings and receives one of his own.

Fringe Benefits is about a very bad cop. It is also the introduction of Officer Gordon Butler, who has become the favorite of fans of the series.

Officer Stacey Wilbur plays an important role in Smell of Death and it is the beginning of the romance between her and Detective Milligan.

An Axe to Grind is about the death of a stalker. For those following Stacey and Doug Milligan's romance, things are definitely heating up.

Stacey is so busy planning her wedding she isn't paying enough attention to the job--and there almost isn't a wedding in Angel Lost.

And of course, No Bells, where Officer Gordon Butler puts his job on the line in his efforts to prove his lady love innocent.

Of course all these books are available in the usual places in paper and ebooks.

Just remember, I wrote them as F. M. Meredith, which is a whole other story.