You'll Shoot Your Eye Out

If you've ever seen the movie, A Christmas Story, you know that Ralphie wanted a Red Ryder BB Gun in the worst way. It didn't matter how many people told him he'd shoot his eye out. He wanted one. Plain and simple.
So Santa did what all good Black Friday shoppers do...


Now, for the sake of today's post, we're going to set aside Ralphie's Life Lesson (remember the incident in the back yard after he got his prized Red Ryder BB Gun???) for just a moment and take a peek back at some of the toys that had Santa rushing to the store for me back in the day (and the Life Lesson I invariably learned frome each one)...

When I was about three-years-old, I apparently wanted a baby doll of my own. So Santa obliged, bringing me one that cried when it was squeezed. I--being the placid child I was-- freaked when I went to hug my new baby and it began to cry.

Santa must not  have liked my reaction because he took it back to the North Pole, sending me a new slip in its place. (Life Lesson: Sometimes fear is best kept to one's self) 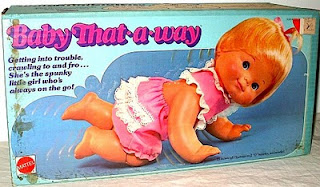 Then, when I was a few years older (I'm thinking maybe 7 or so), I wanted a Baby That-A-Way in the worst way. And how could I not?!? The commercials that played over...and over...and over again during the months leading up to Christmas made her look so cool. I mean, she could crawl!!!!  Crawl, I tell you!!
That Christmas morning, I raced downstairs to find my Baby That-A-Way waiting under the tree! I flipped on her switch, set her down, and watched her crawl across the room...sounding like a coffee grinder--as my older brother so happily pointed out--the whole way. (Life Lesson: Sometimes boys can be so stupid) 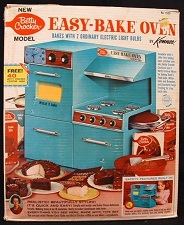 Who could resist the idea of baking something all by yourself?? Not I, says the eight-year-old me. So the EZ Bake Oven was the request of the year that Christmas. My first concoction? A yellow cake with chocolate frosting that I slaved over for a good thirty minutes or so...only to have my grandfather eat it in one bite. ONE BITE!!!!  (Life Lesson: It's okay to have a stash of treats and not tell anyone) 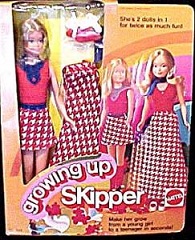 And then there was Growing Up Skipper. You know, the sister (or was it, niece?) of Barbie who grew boobs with the pump of her arm. She was the "it" present when I was about 11 or 12, I think. After the fascination of watching her boobs appear and disappear began to wear off, Skipper became rather depressing over time.  (Life Lesson: Pumping one's arm again and again and again doesn't work for all girls)

Now it's your turn. What were some of your must-have toys...and the lessons you learned from them??

~Laura
Posted by The Stiletto Gang at 3:01 AM