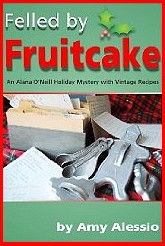 Thanks for letting me stop by the Stiletto Gang today. I was thinking about Joelle’s great blog from earlier this week about the freedom to cook without a recipe. If she ever needs some cookbooks to get inspiration from, I have over 450 in my house. That’s right. And I won’t even count the Retro Crafting section.


I’ve been blogging about Vintage Cookbooks for the past five years, something I did to teach myself some new technology for my job as a teen librarian. (http://www.stdl.org) My cookbook collection spans from Civil War through 1980, and I have some modern cookbooks as well. No, they aren’t arranged by Dewey. Having these older recipes means there is always Crisco in my house, though no Spam currently. I also collect handwritten recipes in boxes. I can’t stand to see someone’s prized clippings and recipes sitting lonely on an antiques store shelf when it could come be with lots of friends on my shelves.
Two years ago a friend suggested I do programs on my cookbooks “as you’re always talking about them.” True enough. I’ve now done over 100 shows on 23 different topics. Who knew so many people like Jello? This was supposed to be a little hobby to pass time while my agent sent my YA mystery around. I now have a VINTAGE WARDROBE. A month ago I had to give a librarian talk – and I didn’t know what to wear, since I was unable to don any of the polyester a-lines I am now used to wearing.  I now answer email about recipes folks want to track down or how to make retro crafts like woven oven mitts. Admit it – you still have some of these…
Amidst the Moon Pies and Fruitcake, I’ve managed some writing. My YA mystery, Taking the High Ground, will be out in 2013, and I have a new reference book out with another coming next year. I’ve also written some short stories about a woman who has a booth in an antiques mall. Alana solves local cases with the help of her smart teen son while trying unsuccessfully to cook some of the things in her beloved cookbooks.  Write what you know, right?
I’ve recently put up the Alana stories on Amazon for Kindle with recipes. The first story is Treasures, the second Missing Andy, and the third is Felled by Fruitcake.  In Felled, Alana is trying to find out what is in some mysteriously popular fruitcakes and what happened when a local church is robbed. A Valentine’s Day adventure with Alana will also be coming that will be published with novellas by Margot Justes (http://www.mjustes.com) and Mary Welk (http://www.marywelk.com).
As for Fruitcake, I serve it at my Vintage Holiday shows, mail ordered from an abbey in Kentucky (http://www.gethsamanifarms.org) . I’ve converted quite a few non-fruitcake eaters. My Grandma Curtin used to make it with the tiny amount of spare money she had.  She’d begin at Halloween and baste it with bourbon right up until Christmas, when she would give it to the neighbors. She left no recipe, but my Mom insists this one is just like hers.  That’s good, because while there are a lot of things I would do for this new career that came out of waiting for publication, but basting a cake with bourbon for two months is not one of them.
__________


Amy Alessio is an award winning librarian and an author. She has presented at RT, ALA, RWA, PLA and more. Her young adult mystery Taking the High Ground will be published by 4RV Press. Her reference titles include the co-authored A Year of Programs for Teens 2 (ALA Editions, 2011) and Mind Bending Mysteries for Teens (ALA Editions, 2012). She is a regular contributor to Booklist, Teenreads.com and Crimespree Magazine.   http://www.amyalessio.com
Posted by The Stiletto Gang at 5:15 AM