I've been reading with interest information regarding the latest case of plagiarism in the literary world.  A novelist named Quentin Rowan writing as Q.R. Markham has admitted to stealing passages from various novels in order to compose Assassin of Secrets, a modern day James Bond-type book published recently by Little, Brown & Company.

Once caught, Quentin wrote a letter to one of the authors whose words he stole, trying to explain. Here's a bit from his email to spy novelist Jeremy Duns, rationalizing away (or is that irrationalizing?):

“Once the book was bought, I had to make major changes in quite a hurry, basically re-write the whole thing from scratch, and that’s when things really got out of hand for me. I just didn’t feel capable of writing the kinds of scenes and situations that were asked of me in the time allotted and rather than saying I couldn’t do it, or wasn’t capable, I started stealing again. I didn’t want to be seen as anything other than a writing machine, I guess. Some call it ‘people pleasing.’ Anyway, the more I did it, the deeper into denial I went, until it felt as if I had two brains at war with each other.”

A tiny piece of me feels sorry for the guy.  Having been under the deadline gun dozens of times myself, I understand the sense of pressure.  But to resort to plagiarizing?  Honestly, my only response is WTF???

It isn't easy writing a book, and it never gets easier.  I have the utmost respect for writers who sit down and compose a draft, accept the editorial letters they in turn receive requesting changes, and sit down again to revise like a madman (or woman).  It's what we do, and we learn to bite the bullet and get it done because that's the only way we're going to write the best damned book we can write.

What a cop out it is to hear someone say, "But revising was too hard!  I couldn't do it!  I had no choice but to borrow words that other authors slaved over and tweaked and revised."

Am I crazy, or does it sound even more complicated to plagiarize?  I can't imagine having to read through book after book, locating specific passages that would fit into the scenes I'm working on, and do that enough times to complete a 300-page manuscript. Yipes. I think I'll stick to what comes out of my own brain, thank you very much. 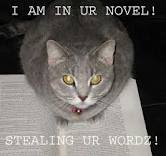 I know I sound mean--I'm feeling a little like Simon Cowell here--but the literary world seems to be taking quite a beating lately and I hate seeing another scandal that detracts from all the good stuff going on. My advice for Mr. Rowan: If you can't stand the heat, get out of the publishing kitchen.


If you can't write your own books and you can't conjure up descriptions and narrative and dialogue from your own imagination, please ask for a ghost writer.  Look at the Kardashian sisters, Lauren Conrad, Hilary Duff, that mom and daughter team on "Selling New York," or Snooki, for Pete's sake.  They don't write their own novels either.  Their publisher pays someone else to do it for them.  Someone who (hopefully) doesn't resort to stealing other authors' words.
Posted by The Stiletto Gang at 3:01 AM