Happy Turkey Day everyone! I hope your day is filled with good food, good company and many blessings. I'll be spending today with my family in central Florida right here. Yep, just a hop, skip and jump from Disney World, shopping, and lots of golf (for the guys), so everyone will be happy.

Despite the fact that I won't be home, I'll still start out my Thanksgiving morning the same way I have for decades. By watching the Macy's Thanksgiving Day Parade on TV!

Now, I love parades, but there is no finer parade than the Macy's parade and Thanksgiving without it would be like... well, like a Thanksgiving day without turkey. So I thought it would be fun to dig up a few parade stats.

For example, did you know that:

In 1927, Macy's introduced their world famous giant helium balloons. The first balloons were of Felix the cat and the toy soldier.

Macy's is the world's second largest consumer of helium. The US government is the first (for some strange reason, I find this fascinating).

Originally, the giant balloons were released in the air at the end of the parade. The balloons had a "return label" on them and anyone who found one and returned it to Macy's, received a prize.
In 1932, an aviator almost crashed his plane after attempting to catch the Cat balloon. As a result of this near disaster, the parade discontinued the practice of releasing the balloons.

Due to a helium shortage in 1958, the balloons were brought down Broadway on cranes.

Santa Claus closes out the parade every year, except in 1933 when he led the parade, but my favorite part of the parade is without doubt, Snoopy! 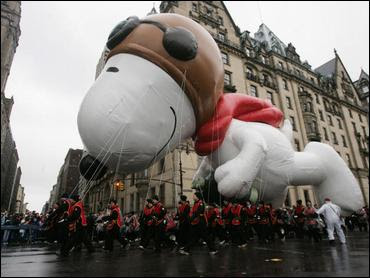