Romantic Fiction...A Way to Deal With His Vanishing Act

As a romance writer, I'm naturally interested in romance. Recently I became a member of an online dating site that sends out dating advice to its members in emails. One headline caught my eye, "Why Men Go Poof!" We've all experienced the disappearance of men we've been seeing. Suddenly they stop calling, or texting, or facebooking, or whatever. No reason given. Or the reason they give is some excuse you find hard to understand or believe. At the end of the day, if someone wants to be with you, they'll be with you, correct?

And yet. When a man goes "poof," I burn with curiosity. But whyyyyyyyyyyyyy did he just vanish? Was it me? I have a vivid imagination, so you can guess all the variations and possible explanations I come up with. In the last month, this happened to me. A week or so later I got up the courage to ask the man I'd been dating for his reason. And fair dues to him (as we'd say in Ireland) he let me know it wasn't me; that he is too stressed to think about included another person in his brain and life. And I believe him, weirdly.

Sure, men can vanish because you have a rabbit in your kitchen you're waiting to boil, or you because you have bad breath, or hate sex, or like it too much, etc, etc. But maybe sometimes they disappear because they have their own issues. Maybe it's not me or you. It's them. And that's why I write romance novellas, because when a man goes "poof" in a story, he always comes back.

Escape his vanishing act by delving into the romantic lives of Jane, Margo and Allison Caldwell as they search the globe for their long presumed dead father, Zach, finding love and danger on the way in, HOLD ME, THRILL ME, ENTICE ME. 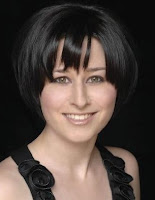 Author bio: Lucianne writes romantic suspense for Entangled Publishing and Cobblestone Press. Born and raised in Ireland, she currently lives in New Mexico with her young daughter.
Formerly a stage and television actress, she now manages a non-profit and is NM State Champion in her weight class for Olympic style weightlifting. Long story. Recently she has taken up Crossfit, Jiu Jitsu and boxing.


ENTICE ME by Lucianne Rivers

Heartsick over the untimely death of her mother, Allison Caldwell is blindsided again by the secret revealed in her mom's will. Her supposedly dead father is alive, and she and her two sisters must find him in order to settle the Caldwell estate.

Robert Rivera, private investigator and former Navy SEAL, alerts Allison to new intel identifying her father as a P.O.W. in Afghanistan. With her sisters out of the country pursuing leads, Allison insists on heading to the war-ravaged country to find him. Robert doesn't want his naïve client to take the risk. He knows what danger lays in that godforsaken land he's lived through it. Barely.

But Allison is determined to go, and Robert can't let her travel alone. Reluctantly appreciative, Allison quickly realizes how much she needs his guidance and protection, and how deeply she longs for his love. Robert struggles to understand her effect on his battle-weary heart.

The path to Allison's father is blocked by terrorists, traps and treachery-all demons of Robert's past. Can he survive a second round with the enemy and keep Allison out of harm's way?

Buy links:
B&N, Amazon , Diesel
Posted by The Stiletto Gang at 5:14 AM