The Beast of Chapter One

I had a different five letter B-word in mind for the title of this blog, but I heard Susan McBride whisper in my ear, “Hey, Miss Laura, try to keep it civil and polite…” I defer to her impeccable manners. I think first chapters will do that, more so than any other part of a book, bring out the worst in you. This first chapter wasn’t an inception, but a revision, which I firmly believe to be more riddled with landmines than any initial attack. Sure, there’s the daunting prospect of blank pages and zero word count when you begin something new. But there’s also gutsy intuition and the promise of unabashed wordsmithing. This just looked like work. The initial first chapter of any book is a sketch. It has to be, unless you’re a writer who outlines every chapter on index cards, tacking them sequentially to a corkboard before turning on your computer. It’s the same methodology used by people who alphabetize condiments or coordinate their closet by color and season. It’s something Patrick Bourne would do, a character in my novel, who I happen to be in love with and also happens to be gay. But I assure you, along with Patrick, that organizational skill set escapes me.

When I first considered the revisions for this book, I almost trashed the entire thing: switch from first to third person, rewrite the main character’s motivation, and match the tone in BEAUTIFUL DISASTER, which, apparently, I failed to do. But like BD, this book, these characters, convinced me to hang on, saving their lives and story in the process. So after I committed (or was committed, the insane never know they are) the first thing I did was chop off Chapter One. There was no point to it, not until I’d coerced and cajoled the other 375 pages into submission. Fast forward three months and I was there, ready to rewrite the first chapter. I will give myself credit; it was the right move, as those other countless changes left me a detailed blueprint. Of course, there’s a reason draftsmen get a flat fee while contractors get an inflatable check. Execution is everything, and if the foundation sucks, well, the rest of the project is essentially a house of cards.
﻿﻿﻿﻿﻿﻿

Night and day for the past two weeks this is where I’ve lived, inside Chapter One. During that time, I made a whirlwind trip to Athens, Georgia, taught a community class on writing/publishing, and banished a 14-year old boy to house arrest after seeing his interim progress report. None of these were simple tasks, but none were as daunting as that chapter. I thought I knew these characters, I really did. But like a weak eyeglass prescription, you’re awed by the clarity when the proper adjustments are made. What I had was that sketch, the one to which I’ve already confessed. Now I have a hand slamming against my forehead, a voice (not Susan McBride’s) saying, “You idiot, why didn’t you see this the first time around!” I suspect it ta 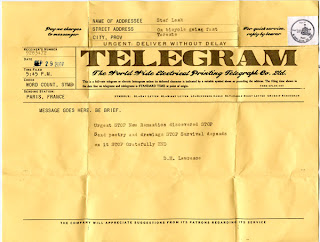 kes me longer than the average author to get to know my characters. I’ve no idea why—I’m slow to peel back layers or simply slow out of the gate. I often envision the entire writing community receiving an old fashioned telegram, complete with character instructions: Single woman, STOP. Tumultuous childhood, STOP. Fearful of her own sexuality,STOP. Lingering denial reaches impasse, STOP. There are a hundred more directives and stops, but you get the idea. Fluidly connect the stops and you've got a first chapter. A telegram is an antiquated analogy, but I like the idea of vital information being hand-delivered in a sealed envelope.
Fortunately, I appear to be on the downside of the first chapter mountain, my stinky pack mule having finally lumbered into camp with the goods. I am satisfied, to the extent any neurotic writer can be, that this Chapter One has its house in order. But in the end, we’ll see, because as we all know, the writer’s word is hardly the last one.
Posted by The Stiletto Gang at 12:00 AM