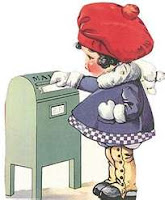 I'm a Model-T in a Maserati world; a propeller plane in a SST universe; in plain language, I'm a dinosaur, and if the news is right, I'm about to be extinct.

The U.S. Postal Service is going under, maybe as early as next year, and I, for one, will miss it.

The speed and cost (free) of email is hard to resist. In fact, I don't. I communicate with many family and friends via the Internet. You may find interesting that until we had completed the first draft of Murder Off the Books, I had never spoken to the Southern half of Evelyn David. We wrote that mystery, as well as a handful of short stories, through email exchanges, eventually moving to instant messaging.

But, perhaps like live theater which is personalized in a way that can never be duplicated on the tiny or giant screen, there is nothing quite so touching as a hand-written note, in the childish scrawl of a little one or the well-practiced penmanship of an adult. I treasure the letters from my parents, both now long gone. I find a glance at their handwriting is a perpetual comfort. I've kept the birthday and Mother's Day cards from my children, smiling at the crayon scribbles when they couldn't yet write moving on to the shaky, backwards letters that accompanied first attempts to print the word "Love" and their names.

I even have love letters, yes, romantic letters sent by my then-boyfriend (now husband) the summer he spent in Africa. That period apart, and those thoughtful letters that described what he was seeing and what he was feeling, were a critical part of transforming a burgeoning relationship into one of commitment.

Surely, the thoughts could have been typed using two thumbs onto an i-Phone or twittered in 140 character transmissions, and then sent through the ether to me. Alternatively, we could have Skyped and talked, albeit with the inevitable 2-second delay. But letters, with his distinctive penmanship, were a treasure during the long days we were apart, and a comfort to be reread each night. My mother-in-law kept the letters her husband wrote her during World War II, when they were apart for 3+ years, until shortly before her death. She chose to destroy them, intent on keeping those moments between them secret and sacred. Unlike computer files which seem virtually indestructible, paper letters, worn thin from years of being reread, do succumb to destruction should the owner opt for that.

With no postal service, does it mean that the annual Christmas card letter will go the way of the dodo? Many folks hate those missives, but I enjoy catching up, if only once a year, with friends from long ago. Or those ubiquitous holiday catalogues? I know that they are ecologically wasteful, but I can remember perusing them and dreaming for weeks of gifts that might come.

I've got nothing but good things to say about our local post office and most especially about Ernie, who has been delivering our mail for 20 years. He knows the people on his route so well that when an elderly lady failed to pick up her mail one day, he called the police to check on her. Turns out that she had fallen and his kindness was a life-saver. When the first three of my kids were awaiting college decisions, back when you got a fat envelope or thin one depending on the result, when the wait for the morning mail was endless to an anxious high school senior, Ernie would arrange to meet us behind the post office, before he began his rounds, to personally deliver the sought-after mail. And certainly not to be discounted, for the writer living as a hermit in her garett churning out murder and mayhem or even a new mom home alone all day with a wailing infant, waiting for the mailman to come is often the highlight of the day

I understand the economics of the post office no longer make sense. I've no doubt that there is waste and inefficiency and a new business model is needed. And like many other things - and people - the post office will have to reinvent itself in order to survive, much less prosper.

In the meantime, drop me a line.

Romances
Love Lessons - Kindle - Nook - Smashwords
Posted by The Stiletto Gang at 5:00 AM