The House Guests That Don't Want to Leave 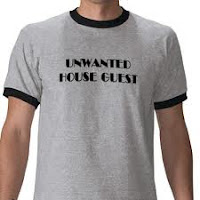 I was talking with Maggie earlier in the week, and she kindly reminded me that this Friday was my blogging day.  I'm heading out of town for the Southern Indie Bookseller's trade show in Charleston--um, like right about now--so my mind has been focused on that (what to bring, what to wear, if I'll miss my connecting flights) and on getting more work done on Little White Lies, which I've barely started.  Little White Lies is my next women's fiction book due on December 1 (yes, you heard right).  It's been quite a juggling act this year, revising Little Black Dress in January and February, getting a first draft of Dead Address done by the end of July (my young adult mystery for Delacorte also due December 1, and it still needs a rewrite!), dealing with Little Black Dress promotion during most of August (with plenty more ahead of me), and now writing a draft of Little White Lies for HC/Morrow.  Needless to say, the days and weeks are going by WAY too quickly.

I tell myself to stay cool.  I've had to write two books in a year before, most notably during the latter part of 2006 and the first part of 2007 when I was diagnosed with my boob stuff and had to undergo surgery and radiation therapy while working on Too Pretty to Die and The Debs.  I've previously mentioned how going to my computer everyday in my jammies helped maintain my sanity and gave me an outlet for all the crazy emotions I was feeling.  But it was also tough.  I wanted to do the best job I could under the most stressful of circumstances at a time when I was supposed to be taking care of my health and NOT stressing out.  But that's life, I think, and I did what I had to do, although both manuscripts were turned in about a month late.  Somehow, despite my fears, the world didn't stop spinning.

Thank goodness, I'm not dealing with any major health crises (knock on wood!) as the deadline for two very different books rapidly approaches.  Regardless, I've found myself in a sticky situation.  I need to be able to move from one project to the next without carrying a lot of baggage.  Only, I've come to realize I have unwanted house guests.  No, not real ones.  Imaginary ones. The kind of house guests that do not require clean linens or three square meals. They have no desire to visit tourist attractions or sit in my favorite spot on the sofa at night, watching TV.  They don't even muck up the guest bathroom or drop their dirty socks on the floor.

Instead they intrude upon my mind.  When I started Dead Address late in the spring, I still hadn't shaken my revision of Little Black Dress from a few months before.  It had been an intense period of about two months where I worked every day (and night), rewriting every page, moving things around, adding new chapters, and otherwise fully immersing myself in the world of Anna and Evie Evans and the magical black dress from the gypsy's shop in Ste. Genevieve.  I could not get them out of my head.

When I needed to focus on Katie, Mark, and Lisa and their boarding school in Dead Address, I was still back in Blue Hills, Missouri, worrying about the sisters and Toni (okay, and whether the back cover copy did the story justice, or how the font on the cover would look). Somehow, I managed to send Evie, Anna, and Toni packing for long enough to write what happened to Katie after opening up the mysterious box with the severed hand.  But now it's time to get my head into Little White Lies (and into the heads of Gretchen Brink, her daughter Abigail, and a mystery man from Gretchen's past), and I've still got Katie, Mark, and Lisa hanging around, wondering when I'm going to start paying attention to them again because I haven't quite finished with them yet.  Oh, and Evie, Anna, and Toni, won't go away so easily either, not as long as I still have LBD events to do (throughout September and October).

If anyone knows a successful method for removing unwanted imaginary house guests, I'd sure appreciate hearing it.  For now, I guess I'd just better keep the sheets clean, the fresh towels handy, and the fridge full (um, figuratively speaking).  One of these days, perhaps, they'll all go back from whence they came, and my house--um, my head--will be unnaturally quiet, at which point I'll have to start inviting new imaginary house guests in.
Posted by The Stiletto Gang at 3:01 AM