News of the Weird

I remember when weird news was often tacked onto the end of a nightly broadcast, usually in the vein of "stupid criminals" clips where a bank robber wrote his stick-up note on the back of his own deposit slip or an "aw, shucks" tale with an orangutan adopting a baby tiger at the local zoo. You know what I mean.

Now every time I turn on the TV or click on an Internet newspaper, it doesn't take much searching to find news of the absurd. It's front page headlines. Journalism has turned into "Entertainment Tonight," and that's not a good thing.

So far this week, all I've seen is Charlie Sheen's face everywhere, professing his 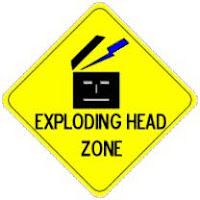 fabulousness, when it's pretty clear he's got problems even bigger than his ego. I saw an article that said a lot of stars who got in trouble this past week owe Charlie a big favor for keeping them off the cover of People magazine. Like Christina Aguilera who ended up in the drunk tank with her boyfriend after a bender. And Galliano, the Dior designer (er, ex-Dior designer) who made more than a few anti-Semitic remarks caught on someone's cell phone camera. I don't even know what Mel Gibson's up to lately because Charlie's superseded his baby-mama drama by a mile.

Oh, yeah, and there are revolutions galore going on in the Middle East. And we're still in a recession with all sides of the political aisle at war because everyone seems intent on helping themselves instead of fixing things.

I just wish someone would please stop the madness. Why does the media keep having this guy on when it's clear he needs serious help? I'm not sure how his delusions and obvious self-destruction constitute entertainment.

Then I think about the dystopian young adult best-seller THE HUNGER GAMES, which features teens killing each other all in the name of sport. I hope we never sink that low, but it does seem like we're turning people's misery into live entertainment, and it's even worse than "Jersey Shore" and "The Bachelor" combined.

As a J-School major, I'm disappointed at what counts for news these days. Walter Cronkite must be turning over in his grave. Give me stories that matter: about regular hard-working people who are making a difference, small businesses that are thriving despite the financial mess, research scientists working on cures for disease, and explorers unearthing new species or stars. And not the kind of "stars" that seem to rule television and the Internet ad nauseum. Those I can live without.
Posted by The Stiletto Gang at 5:00 AM