How to Succeed in Business 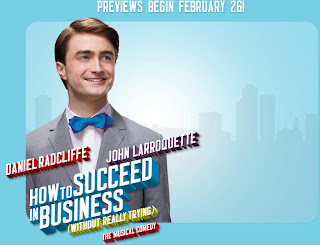 The truth is he can't sing particularly well; he's a so-so dancer; his comic timing is off; and as an aside, I had no idea he was that short.

So why did I leap to my feet at the end of the show to give Daniel Radcliffe and the cast of How to Succeed in Business Without Really Trying a standing ovation? Because the finale was a show-stopper and most of all, because I was in awe of the risk this 21-year-old kid had taken.

Sure it's easy to try something different and risk failure when you're a gazillionaire, but this was putting himself "out there" in a very public way and nobody, not even gazillionaires, likes bad reviews.

After seven, going on eight, Harry Potter movies, the chance of being typecast is basically a sure thing. But in the last 18 months, Daniel Radcliffe has deliberately chosen to project a new image and expose himself literally in Equus, as well as figuratively. He made a conscious decision to reinvent the public persona that his role in the blockbuster movies has made.

All of which gave this author pause. It's easy, as you age, to become risk averse. Stick to what you know and what you know will sell.

Write a successful cozy. Write another one.

Heck, even simpler. Serve a recipe that's worked for the past 20 years – and never bother to change the menu. Jalapeno peppers? Never bought one. Have no clue what I would do if I did.

But there I was, in the darkened Al Hirschfeld Theater, just steps from the gleaming lights of Broadway, and I pondered, for a change, not How to Succeed in the mystery business, but how to shake things up and change on a bigger, pardon the pun, stage.

As Goethe told us: "The dangers of life are infinite, and among them is safety." 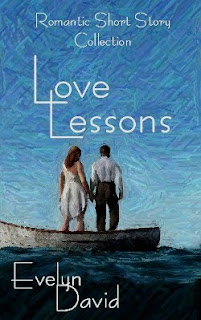 I've been in a comfort zone when it comes to writing. It's time to take some risk. I made a start when Rhonda convinced me to write the Brianna Sullivan series. I didn't like, to be honest was afraid of, the paranormal. But exploring the world of ghosts has made the world of the living all the more exciting and fun. Next up is a series of short stories about love and romance. Should be published in e-book formats in the next week. If they sell, wonderful. If they don't, I have no regrets. I tried.

And that's how it should be. The point is not whether Daniel Radcliffe or I succeed. What's important is that we walked out there and risked failure. As T.S. Eliot wrote, "Only those who risk going too far can possibly find out how far they can go."

Marian, in search of Jalapeno Pepper for dinner