Beauty is in the Eye of...Photoshop?

If you pick up the April issue of Good Housekeeping—the one with Dr. Oz on the cover—and turn to page 59, you’ll find a full-page photo of yours truly.

My 11-year-old’s first reaction? “Mom, this doesn’t look anything like you.”

I beg to differ. It looks exactly like me. Only better.

Let’s backtrack. A few months ago, I was contacted by Good Housekeeping to be interviewed about a powerful, and effective, new cancer drug. It was an immunotherapy and the one that I had taken. It was the one that saved my life, because having been diagnosed with Stage IV melanoma in 2006, my chances for survival were slim to none. I entered a clinical trial for a drug called tremelimumab (say that three times fast) and had an immediate, positive response to it. My tumors, which numbered in the hundreds, began to shrink and fade (many were bluish and on my skin) and were eventually eradicated. It was nothing short of a miracle.

The cousin of this drug, ipilimumab, will be approved by the FDA for use in metastatic melanoma patients this Friday and believe me, this is an occasion for celebration. Now, there is hope for people who once had little hope for survival.

But back to the photo. After I was interviewed and the story was edited, I was asked for some photos of me and the family. Trouble is, we don’t have too many photos, so the Barbieri family started photographing each other, with limited success. Here is an example of one of the photos we took and submitted to GH. 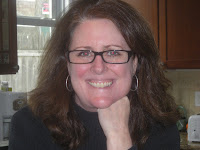 After sending the editor at the magazine a bunch of photos, she called and said that they would be sending a photographer to me to take a photo. Little did I know what that entailed.

The photographer was a wonderful guy named Rob Howard who couldn’t be nicer or more respected and well-known in the photography world. He was accompanied by his lovely wife, Lisa, a professional hair and makeup stylist named Birgitte, and the shoot stylist from Good Housekeeping, Bill. Of course, because they were coming from a housekeeping magazine, I vacuumed, dusted, and had my friend, Susan (from the wonderful Baked by Susan—“like” it on FB!) make scones. They were duly impressed.

Until they moved my couch.

As I sat getting my hair and makeup done by Birgitte, I heard Rob, who has photographed kings and OPRAH (!) ask, “Does Maggie have a vacuum?” At his uttering of those words, my hair, formerly poufed and teased, fell just a little bit. Why, oh why, Rob Howard, did you have to move the one piece of furniture that I haven’t vacuumed behind since the Clinton administration?

Once the house really was clean, thanks to Rob and his team, it was time for my photos. Three hours and about two hundred photos later, they had their shot. And here is it.

Yes, I am a little airbrushed, and no, my teeth aren’t that white, but I think it’s a pretty good representation of my overall look. The one thing that makes me very happy is that it is a photo of my laughing, which really reflects my overall outlook on life and the spirit of this article. I was nervous that my joy at overcoming a diagnosis like Stage IV melanoma wouldn’t be adequately expressed, but it is. And this photo really illustrates the happiness I feel every day that I am still here to discuss something that at one point, had a very questionable outcome.

I hope you’ll pick up this month’s issue of Good Housekeeping magazine even if it’s only to see how clean my house is.

Maggie Barbieri
Posted by The Stiletto Gang at 5:00 AM