As I write this, I am very far behind on writing my fourth book in the San Juan Island Mystery series. I have a title, a nice first chapter, and half an outline.  Which is at least half a draft short of where I wanted to be at this time.  And in other news, there’s a pandemic and my child just started back to school, but for some reason school doesn’t start until 9:45.  Why this is I have yet to determine, but it delays the start of my work day by a significant chunk of time.  I would love to say that those two events are causally related, but they’re really more corollaries. They are linked and related through the reality in which we wade, but, as much as I would like to, I can’t actually say that my school districts scattershot, indecipherable response to the pandemic is actually to blame for not sticking to my schedule.  I may be able to blame the pandemic itself, which has sent me head long into escapist fun writing and sees me closing in on finishing a trilogy of paranormal romances, but I think, in the interests of truthfulness, that’s as far as I can pass the blame. But as school starts back up there is a lot of twittering about the kids being behind. Or not being behind. Or being able to catch up no problem!  To which I say… yeeeeeah?  Maybe.  The truth is that private schools have been in person and in session for much of this time.  So if you could afford private school, which generally means that your kid (who was already looking at better outcomes than a public school kid) is, in fact, ahead.  Yes, the public school kids will bounce back and they’re already in similar boats to each other, but let’s just say that some kids have better rowers on their team than others.  Yes, everything will work out in the end, but the rah-rah “no one is behind” cheer strikes me as particularly delusional when I can point to a whole contingent of children who are receiving a better education due to finances. The pandemic has distinctly widened the gulf between the haves and have-nots.

But back to me.  Am I behind?  My deadlines are relatively self-imposed.  I can flex them.  Is it sooooo bad to be running late?  Maybe if I type for two days straight I can catch up?  If I can learn anything from the school debacle, it’s that no, probably sprinting to catch up is not the way.  Writing consistently is probably a better way to get quality work.  But having already not done that, it’s probably best to go the public school route and tell myself that I’m not behind and that everything will work out in the end. 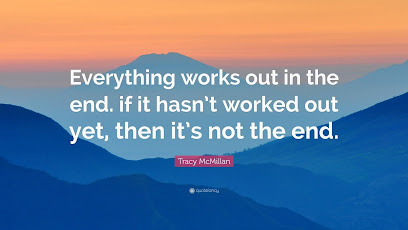 Bethany Maines is the award-winning author of the Carrie Mae Mysteries, San Juan Islands Mysteries, The Deveraux Legacy Series, and numerous short stories. When she's not traveling to exotic lands, or kicking some serious butt with her black belt in karate, she can be found chasing her daughter or glued to the computer working on her next novel. You can also catch up with her on Twitter, Facebook, Instagram, and BookBub.