The Making of Kelly Quinn

I've just finished reading the proof pages of my upcoming novella in my Resale Boutique series, WHAT NOT TO WEAR TO A GRAVEYARD, which meant I got to spend a little more time with fashionista-turned-amateur sleuth Kelly Quinn. She’s a hoot to write and I’m so grateful that somehow, someway the nugget of her character graced me one day allowing me to create (in my opinion) a fun, multi-dimensional, strong female character.

One question I get a lot is how stories and characters come to me. Sometimes a story idea hits me as a character goes looking for a missing dog and then finds the dog’s owner dead –murdered. Sometimes a character idea hits me like I want to write about a food blogger. Whatever the first spark of an idea, I think about all the what if’s and build a plot and populating the story with characters.

For the Resale Boutique Mystery series, Kelly came to me several years ago when I wrote a short-story on a snowy weekend. Back then Kelly had a different name and was tracking down a missing dog only to discover the dog’s owner dead – murdered. Five-thousand words later I typed THE END and sent it off to my critique partner. My plan was to submit the short story to an anthology. After polishing the manuscript, I emailed it off and waited. And I waited some more. Then the email came and I kind of wished I was still waiting. It was a very polite rejection.

Yes, the rejection was disappointing, but I was busy with work and writing a romantic suspense novel so I dusted myself off and moved on. The short story remained in a file on my computer and in the summer of 2017 I pulled out the short story and revamped it for a proposal to send to my editor at Kensington for a new cozy series.

Kelly got her new name and a new career and then the devastating news her beloved grandmother had died. She then found out she inherited the tired, old consignment shop she spent so much time in as a child before leaving Lucky Cove to attend fashion school in New York City. I continued plotting the story and filling Lucky Cove with its residents.

First up is Pepper Donovan. She’s been the only employee at the Lucky Cove Consignment shop for over twenty years. She worked side-by-side with Kelly’s grandmother and they became the closest of friends. Pepper is having a hard time understanding why Kelly wants to change things in the store.
There’s Kelly’s uncle, Ralph Blake. He was named the executor of the estate by his mother. Ralph expected to inherit the shop, which sits on prime real estate in Lucky Cove and would sell for a very nice sum. Lucky Cove is a quaint Long Island town that’s not as flashy as the Hamptons but still draws very wealthy and successful Manhattanites during the summer months.

Luckily Kelly has her best friend, Liv Moretti, to lean on when things get out-of-control when Kelly is dragged into a murder investigation which begins with a psychic claiming one garment in the shop was worn during a murder. Word spreads quickly in Lucky Cove and business, which wasn’t good to begin with, plunges.

Writing Kelly was a fun departure from writing Hope Early, the protagonist in my Food Blogger Mystery series. She’s in her mid-twenties, whereas Hope is in her thirties. She doesn’t have the comforting support of her family like Hope has and returning to her hometown was the last thing she ever thought she would do whereas Hope always knew she’d be back in the place where she started. What they share is having their careers derailed, humiliating firings and a deep-seated need to seek justice for those who can’t. Oh, and one more thing, they each have a very cute guy that they heart.


I'm happy to share that the short story that had been rejected turned into the novella that is releasing in September. I guess things do happen for a reason. :)

Thank you for spending a few minutes with me today. I truly appreciate it! 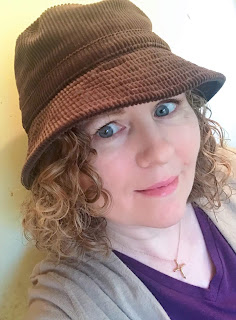 Debra Sennefelder is the author of the Food Blogger Mystery series and the Resale Boutique Mystery series. She lives and writes in Connecticut. When she’s not writing, she enjoys baking, exercising and taking long walks with her Shih-Tzu, Connie. You can keep in touch with Debra through her website, on Facebook and Instagram.
Posted by Debra S. at 3:00 AM