Writing is often referred to as a lonely or introverted activity. Successful promotion, on the other hand, requires one to be gregarious, friendly, and “on.” If you hand me a microphone, I can take on the characteristics of a comedienne, but the reality is I’m shy. So, why did I recently take on a four city in ten days promotional tour? Insanity? A personal challenge? Stupidity? A detour side trip addition of one city to meet my son’s girlfriend?


Probably, for every reason cited above.


On Friday, January 3, I flew to Houston for a book discussion and signing with Kay Kendall
at Murder by the Book on Saturday, January 4. We planned this gig months in advance – months

before we knew that at the exact time we scheduled the event, Texas would be in the playoffs. Kay and I were very thankful to the 30 plus folks who obviously weren’t sports fans who came to the store and for the over 1 million who dropped in on the live stream. It was my first-time live streaming and it was great to hear from people all over the country who watched it. What a great signing…. and if you aren’t aware, what a wonderful store.


I caught the last plane out of Houston to Denver. Boy, was I sweating considering Denver had snow a day or so earlier. I had visions of the plane being cancelled, but it wasn’t. Got to Denver, saw my youngest son close to midnight, and by noon I was at The Book Bar for a signing. A combination bookstore, coffee and other items bar, I fell in love with how they’ve pulled off the   (yes, I liked her) 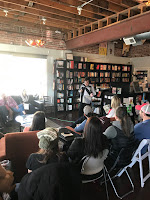 concept. Also appreciated all the friends of my son who gave me a standing room only audience. This was one time I’m glad he’s never met a stranger. Of course, meeting his girlfriend and her mother while trying to do a book talk about my life was an eerie feeling, but again, all went well.


Tuesday morning, I left snow on the streets Denver and flew to Scottsdale for a dream come true. When I began writing, a friend told me that if I could get a signing at The Poisoned Pen, my career would have credibility. I don’t know about that, but I can tell you that I’m a super fan of The

Poisoned Pen. Not only are there books galore and a warm and engaging staff, but the hanging pictures of authors who have spoken there sometime in the past thirty years was wonderful to see. (Some of the authors still had hair when they made their first visit to The Poisoned Pen). I also appreciated some special people coming out to join the audience.


That night, or should I say morning, it was red-eye time. I landed in Birmingham on Thursday morning, did laundry, slept, and jumped
in the car to make Memphis before a predicted storm blew me off the road.

Not only was it fun visiting friends, but the Sunday book discussion and signing at Novel was with a friend, Beth (Jaden) Terrell. Always fun to play off each other (we were on a panel together at the Southern Book Festival) and we both adored the story of Novel. When this local bookstore was going to have to close, people in the community raised the money to take it over and keep it going. And that’s an understatement. The store is full of books and people who love books.


The tour finished the next morning with an appearance on Live at 9 on Memphis television station WREG-TV. Marybeth Conley is very generous to authors --- and a great reader of our books. You can watch the interview here .


I drove home and was tired, but I’d do it all again in a moment. Do you like attending bookstore events? Leave a comment and have a chance to win a copy of One Taste Too Many, the first in Kensington’s Sarah Blair mystery series.
Posted by Debra H. Goldstein at 6:00 AM