The Red Pen of Doom Murders The Fountainhead 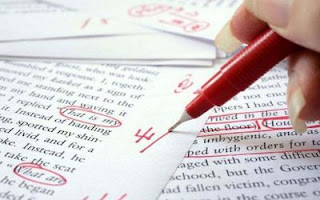 I like to read other writers’ blogs, because I can often find out new ways of doing things, get tips on all aspects of the publishing game, and just find someone who understands what we're all going through. Sometimes, a writer will do unusual things with her or his blog that really sets them apart and causes me to place them high on my list.

Such is The Red Pen of Doom, the blog of Guy Bergstrom, a journalist and speech writer. Bergstrom has valuable writing tips, random reviews of books, movies, and TV shows, social media wisdom, and weird news of the publishing and real worlds. I find this eclectic mix amusing, useful, and always interesting.

I must admit that my favorite post on his blog, however, is “The Red Pen of Doom Murders The Fountainhead.” This is part of a series of posts where Bergstrom takes on well-known novels as if he were the English 101 professor and they were freshmen themes. They can be absolutely delicious fun, but none of them is as hilarious as this one, which looks at Ayn Rand’s famous novel, The Fountainhead.

My favorite line in his post, I believe, is “Otherwise, I don’t hate her writing per se. I merely despise it.” It's tough to choose, however, because this post is loaded with zingers.

So enjoy, and when you finish, check out the rest of his blog for some actually good practical advice on writing and publishing, as well as other interesting tidbits. He's also around on Twitter @speechwriterguy. Give him a follow.

Posted by Linda Rodriguez at 12:45 AM