Today we have a very special guest, Grace Topping. Grace is the debut author of Staging Is Murder  from Henery Press and she has some interesting things to say about identity. Welcome to Stiletto Gang, Grace! -- Shari Randall 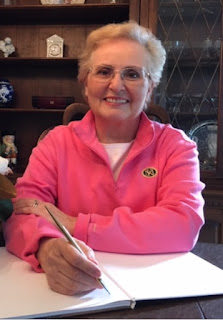 If someone were to ask me how I would identify myself, I wouldn’t know how to respond. I’ve had so many identities, and over my lifetime, they’ve changed so much and so fast just thinking about them makes my head spin. My response would have to be based on who was asking and the circumstances surrounding the question. Just who am I?
Our identities start out so simply. I was a daughter, sister, grandchild, niece, etc. When I got older, I became identified by the grade I was in, the religion I practiced, the area of town I lived in. Then as life became more complex, things such as nationality, race, age group, career category, marital status, and political affiliation further identified me. The list kept getting longer. If I were to make a list of all the ways I could be identified, I would run out of paper. It also made me think of those identities I would like to add such as award-winner, bestseller, and millionaire. Why not have fun with it.
Several things happened recently to make me think about my identities—the ones I could control and those I couldn’t. You may ask how you could have an identity you couldn’t control. Lose your parents and you become an orphan. Break the law and you become a convict. Lose your job, you become unemployed. Forced changes in identity.
An identity crisis I experienced recently started with my becoming a mystery writer. I became very self-conscious, worried that people would think I identified with my main character. In fact, several early reviewers asked me, “Is this you?” As a result I described my main character totally the opposite of me. She’s tall. I’m short. She’s trim and fit. I’m not so much. She’s young. I’ll leave it at that. Perhaps she became my alter ego.
A second thing happened. Someone cloned me on Facebook—took my identity and created another Facebook page and then started sending out friend requests from this other me. This was far worse than reading about the theory of parallel universes or a mirror image of this universe, where there could be another being identical to me. At the least the other me in a different universe wouldn’t be close enough to affect my Facebook status or things like my bank account. 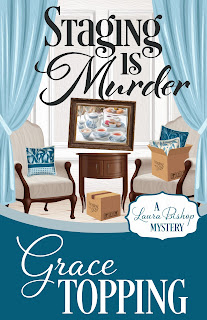 The third thing related to identity happened when I gathered the paperwork needed to apply for a Real ID-compliant license. Sometime in the near future, travelers will be required to have a Real ID to be able to board a domestic flight (unless you want to carry your passport with you for travel within the U.S.). To apply for a Real ID in Virginia, I needed a passport or birth certificate, Social Security card, and two proofs of residence (utility bill, bank statement, etc.). Something official to prove I live where I say I live. I discovered that all of the utility bills only showed my husband’s name. Where was I in this picture? I suddenly felt sorry for the people who would have a hard time proving their identities.
So how would you identify yourself? This week, I’m claiming mystery writer.

Grace Topping is a recovering technical writer and IT project manager, accustomed to writing lean, boring documents. Let loose to write fiction, she is now creating murder mysteries and killing off characters who remind her of some of the people she dealt with during her career. Fictional revenge is sweet. She’s using her experience helping friends stage their homes as inspiration for her Laura Bishop mystery series. The first book in the series, Staging is Murder, is about a woman starting a new career midlife as a home stager. Grace is the current vice president of the Chesapeake Chapter of Sisters in Crime, and a member of the SINC Guppies and Mystery Writers of America. She lives with her husband in Northern Virginia.

About Staging is Murder

Laura Bishop just nabbed her first decorating commission—staging for sale a 19thcentury mansion that hasn’t been updated for decades. But when a body falls from a laundry chute and lands at Laura’s feet, removing flowered wallpaper becomes the least of her duties. To clear her young assistant of the murder and save her fledgling business, Laura’s determined to find the killer. Turns out it’s not as easy as renovating a manor home, especially with two handsome men complicating her mission: the police detective assigned to the case and the real estate agent trying to save the manse from foreclosure. Worse still, the meddling of a horoscope-guided friend, a determined grandmother, and the local funeral director could get them all killed before Laura props the first pillow.