This year has been an unusual one for me.  I set out with the intention of pushing myself into uncomfortable and new areas in my writing.  As a result, I’ve submitted short stories to publications, submitted my work to contests, and tried out different genres and formats.  As I expected, there have been rejections and a few “not quites”.  But I have been surprised to see that several of my gambles have paid off.

I’ve had a short story published, taken a screen-writing class and subsequently won an award for my screenplay, ventured out to read my work in public and had it featured on the radio.  My most recent success came from the Book Excellence Awards where mynovella The Seventh Swan, a sci-fairy tale, was a Finalist in the Adventurecategory. I must confess that this award makes me happier than it probably ought to.  My story features alligator-men, robots, nanites, an evil queen, and of course, true love – it’s a throw-back to the Flash Gordon, Tarzan-type adventure tale that I’ve always loved and I thought that it was probably a bit too weird to win.  So to see that someone else thinks it’s a gem is very encouraging.

But, while winning awards is nice, it’s not my goal.  The majority of the places I’ve submitted to came with the promise of feedback.  My goal was to learn from the responses I got to help my writing become stronger. No one really likes hearing that something isn’t working, but it has been really helpful to hear the commentary and discover what exactly people are responding to. And of course, I can now say that I’m an award-winning author and who doesn’t like that? 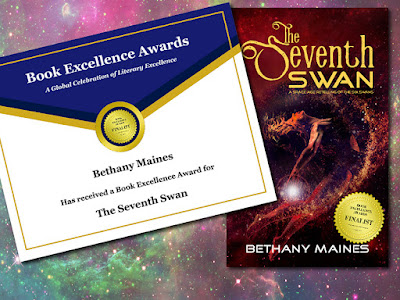