What a Month or Three New Babies!

What A Month or Three New Babies! by Debra H. Goldstein
May proved to be a crazy and wonderful month. It was so exciting, I want to share it with you.

The month began with my husband and I being on pins and needles anytime the phone rang for fear our daughter, Jennifer, whose first child was due on May 25th had gone into early labor. We breathed a sign of relief at the end of the first week.
Then, the doorbell rang. It proved to be a different kind of delivery. Two boxes from Harlequin . I tore into the box and held the new Harlequin Worldwide Mystery version of my second baby (book).
Should Have Played Poker: a Carrie Martin and the Mah Jongg Players Mystery.

Here’s the history of my second book. In 2014, Five Star purchased Poker. Because its 2015 calendar was filled, the book was scheduled for publication in 2016. A hardback version was released in April 2016, but to my dismay shortly thereafter Five Star ended its mystery line. Instead of a series, Poker became a standalone. Then, a nice thing happened. Harlequin Worldwide Mystery bought the book’s mass market rights. That meant it would be distributed to Harlequin’s book clubs and mystery subscribers and would also become part of its catalog for the general public to buy in a reasonably priced paperback format. With joy, in May 2019, I held the new edition of Poker, which officially releases on August 6, but already can be pre-ordered for the special discounted price of $6.39 - https://www.harlequin.com/shop/books/9781335455468_should-have-played-poker.html.

Despite my happiness of the rebirth of this book, my attention still was on when Jen’s baby would   Another week went by – nothing. Her due date came – still nothing. She appeared to be no closer to delivery than I was. The doorbell rang again. When I opened it, no one was there. I looked down and was surprised to see a box. Confused, I carried it inside and carefully opened it. The box contained ARCS of Two Bites Too Many, the second book in my Sarah Blair series, which will be available on September 24 (but can be pre-ordered for delivery on that date at https://www.amazon.com/Bites-Many-Sarah-Blair-Mystery/dp/1496719484 or https://www.barnesandnoble.com/w/two-bites-too-many-debra-h-goldstein/1130055243 .


Again, I was excited, but my mind was on Jennifer. Would her baby ever arrive? Of course, on May 31, 2019, Eliza Rose Feld entered the world. As happy and excited as I was at the other two May deliveries, neither topped Eliza. I’m over the moon at my third May delivery … and I think it will be a few days until I come down long enough to write anything that isn’t gibberish. Do you blame me? 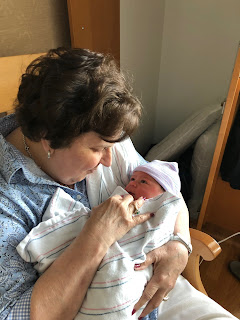 Email ThisBlogThis!Share to TwitterShare to FacebookShare to Pinterest
Labels: babies, baby, Debra H. Goldstein, grandchildren, Should Have Played Poker, Two Bites too Many