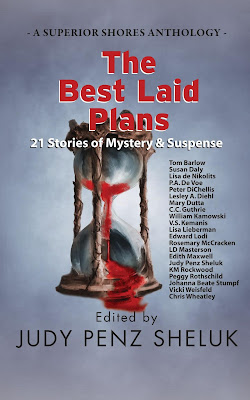 I'm beyond excited to announce that the The Best Laid Plans: 21 Stories of Mystery & Suspense is now available for pre-order on Kindle and in trade paperback at all the usual suspects. This is the first multi-author anthology to be published by my imprint, Superior Shores Press.

The original call for submissions went out on October 18, 2018, with a deadline of January 18, 2019. In all, 71 stories were received from the U.S., UK, Canada, Norway, Italy, South America, and Australia. Cutting the submissions in half, to a more manageable 35, was the first step. That done, I was left with the unenviable task of rejecting 15 stories I really, really liked.

It took multiple reads and an Excel spreadsheet that included word counts and basic theme/location/premise. To be balanced there has to be a mix of length, and premise. Three stories with black cats, for example, would never do. (As an aside, there are no black cats in the book, though there is cat food in one particularly creepy story.)

At the same time, I wanted an overall word count of approximately 70,000 words, and 21 stories in all. Hence, 20 stories at 2,000 words each wouldn't work, any more than 20 stories at 5,000 words would work. Which means that some great stories had to be rejected. I like to think all of those will find a "home" because they are definitely worthy.

And now, here's a brief synopsis of the book:

Whether it’s a subway station in Norway, ski resort in Vermont, McMansion in the suburbs, or trendy art gallery in Toronto, the 21 authors represented in this superb collection of mystery and suspense interpret the overarching theme of the best-laid plans in their own inimitable style. And like many best-laid plans, they come with no guarantees.

The Best Laid Plans: 21 Stories of Mystery & Suspense is available on Kindle, and in trade paperback at all the usual suspects, including Amazon, Barnes & Noble, and Chapters.Indigo. Release date is June 18, but you can pre-order it now.