A Tribute to Sandra Seamans

If you’re a writer of mystery short fiction, you’ve probably followed a blog called “My Little Corner” that was written by Sandra Seamans. Faithfully, Sandra chronicled potential publishers seeking short fiction and linked to information about the submission guidelines. Every time I spoke to groups about writing short stories, I referred them to Sandra’s blog as an essential market guide.

Sadly, Sandra Seamans passed away on the morning of Thursday, May 23, 2019. Here is a link to her obituary.

Paul D. Brazill wrote a message spotlighting Sandra’s talent and work on December 3, 2010. He began with a quote from Sandra, who described herself as “a wife, a mother, a grandmother, and a writer. But not always in that order.”

Later in the Brazill interview, she explained how she became a writer and why she felt that short stories were important:

“I’ve been making up stories in my head since I was a kid but about twenty years ago I decided to start putting them down on paper. Not very good ones, I might add. I discovered that there was a whole lot I didn’t know and started studying. About five years or six years ago I started submitting my stories on a regular basis instead of just one a year then quit for a year because it got rejected. Staring that rejection in the face, then sending that story back out is the hardest part of writing. . . . I was also tired of being told that just writing short stories wasn’t good enough, that you had to write novels to be an actual author. But there’s so much talent out there in the short story field, and especially online, that I decided to share what I loved about shorts, the writers who pen them and the zines that publish all those great stories. So, the Corner became a place to celebrate short stories.”

Since her passing, a number of authors have written tributes about her contributions:

“Loss and Gratitude” by Travis Richardson at Sleuthsayers (June 3, 2019).

Her blog, which she last updated on May 16, 2019, contains messages of admiration and respect in the comments to her final message: https://sandraseamans.blogspot.com/

In 2007, Sandra’s story “Home Entertainment” (A Cruel World, July/August 2006) was a finalist for a Derringer Award for Best Flash fiction.

From 2010-2012, she served as President of the Short Mystery Fiction Society. Prior to her election, she wrote a statement that was posted on the SMFS blog. Here are a few snippets from that message:

“I’d like to see every short story writer feel welcome at the SMFS, no matter if they write cozy or dark. Only the strength of the story should count. . . . I’d also like to see if we could get editors to post more often on the list - get them to give us insights into their selection process or maybe just do a Q & A interview that we could post. . . . Shorts are starting to come into their own via the online markets, there are more and more people talking about them and I know of several sites that actually review individual stories and collections. As a short fiction society we should be a part of this. Well, I know I’m not supposed to be posting this before I’m asked, but the membership deserves to know where I stand so they can nominate someone to run against me if they don’t agree with what I believe the SMFS should be about. And I’d really prefer that this be an election not just a put her in office because nobody else wants the job situation.” 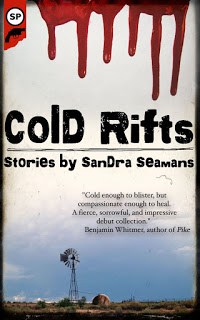 Unfortunately, Sandra’s anthology, Cold Rifts, is no longer in print. I appreciate so much the interviews and tributes I found for this post because they directed me to links where you can read Sandra’s work online and in anthologies. Here is the list of Sandra Seamans’ stories that I found:

The following are available though Amazon:

“The Gimmick” in Discount Noir an anthology edited by Patricia Abbot and Steve Weddle, Untreed Reads (October 21, 2010) (available on Amazon).

“Taking Back” in Grimm Tales an anthology edited by John Kenyon with introduction by Ken Bruen, Untreed Reads (December 19, 2011) (available on Amazon).

In a July 25, 2012, interview with Steve Weddle, Sandra described the process that led to her story “Taking Back” in Grimm Tales:

“The minute John Kenyon put up the challenge to rewrite a fairytale into a crime story, I was in. Yeah, I’m a fairytale freak. I also knew I wanted to do something different. There are only so many variations of the usual suspects that you can write. I found a website that had many of the Grimm’s published. Reading down through the list of titles ‘The Blue Light’ caught my eye. It was the story of a Soldier who’d fought for the King and when he was wounded and not as useful, the King sent him away. Through a meeting with a witch he finds a way to get his revenge on the King - perfect setup for a crime story. I used the basics of the fairytale but turned the soldier into a cleanup man for a mob boss, gave him some rules he lived by and off we went. It was a fun story to write.”

Thank you to a writer’s writer, Sandra Seamans. We are richer for the legacy you have left us.