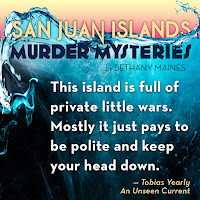 I am currently working on book three of the San Juan Island Murder Mystery series – An Unfamiliar Sea.  In the San Juan series, Seattle native, Tish Yearly found herself fired from her day job and evicted from her apartment all in one day. Desperate, the 26-year-old ex-actress, heads for the one place she knows she’ll be welcome – the house of her cantankerous, ex-CIA agent, grandfather, Tobias Yearly, in the San Juan Islands of Washington state.  And of course, upon her arrival on Orcas Island in An Unseen Current, Tish is thrown head-long into a mystery that pits her against handsome but straight-laced Sheriff’s Deputy Emmett Nash, a group of eccentric and clannish local residents, and a killer who knows the island far better than she does.  Tish and Tobias band together to solve the mystery and Tish settles into what she thinks is a temporary stay on Orcas.  But in Against the Undertow, Tish is considering making her stay permanent, while she and Tobias are facing down Nash’s angry ex-wife, his psychotic ex-girlfriend and a strangely venomous group of hippies as they try to solve the mystery of who killed Nash’s ex-wife’s boyfriend.  And finally, I’ve arrived at An Unfamiliar Sea and Tish is trying to build a business, a relationship and solve the mystery of who killed a local waitress. 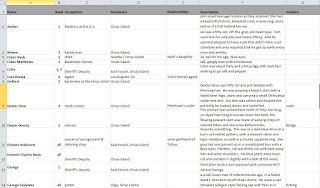 Writing a series is fun, but there is a lot of organization that has to be done to make sure that storylines and characters stay consistent across the series. I use a spreadsheet that tracks not just character names, but ages, descriptions, and affiliations, as well as what book they were mentioned in. While this tool is invaluable, I have found multiple instances where I did NOT make notes on a character and then have to go back and look them up! If I could go back and kick my past self in the shin, I would! Past Self is very spotty about note taking and could really use a little more diligence.  Fortunately, I have been graced with a Beta Reader who has read the entire series and will hopefully pick up a little of Past Self’s slack. Please send thoughts and prayers to my saintly Beta Reader as she cracks open An Unfamiliar Sea.

AND COMING SOON - AN UNFAMILIAR SEA

**
Bethany Maines is the author of the Carrie Mae Mystery Series, San Juan Islands Mysteries, Shark Santoyo Crime Series, and numerous short stories. When she's not traveling to exotic lands, or kicking some serious butt with her fifth degree black belt in karate, she can be found chasing her daughter or glued to the computer working on her next novel. You can also catch up with her on YouTube, Twitter, Facebook, Instagram, and BookBub.