Fishy Business - Guppy Anthology - The Motivation Behind its Capers 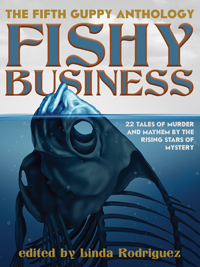 Fishy Business - Guppy Anthology - The Motivation Behind its Capers by Debra H. Goldstein


Fishy Business: the Fifth Guppy Anthology edited by Linda Rodriguez was officially released last weekend at Malice Domestic. The submission call required the story to include a caper. I blanked when I thought about writing a caper. The only caper(s) that came to mind were the ones I get at the deli on my bagel, nova lox, and cream cheese. And that’s when it hit me – I should build my caper around what I knew. The result is Nova, Capers, and a Schmear of Cream Cheese.


Reading the fantastic twenty-one other stories in the anthology, I wondered about the motivation behind each one. So, I asked:


Did your personal background play into your caper story? If so, how. If not, what was the motivation behind your story?

The call for caper stories for Fishy Business fired up my inner Nancy Drew. As a girl, I loved reading about Nancy fearlessly sleuthing in the dark of night with a flashlight. For my story “Windfall” I imagined two girls sneaking into an empty house in pursuit of some sort of hidden treasure. I made the house an old adobe in New Mexico, my home state for many years, and drew on my experiences teaching community college students for the contrasting characters of the two girls. So yes, my personal background played into this story. It was a fun one to write, and I hope readers will enjoy the caper aspect of it.


Absolutely. Silicon Valley, where I have spent past 28 years, is a place of mythical success but a lot of that is based on luck. Should you take a chance on this job or that? What is the upside? How many commas do you have in your personal net worth? This leads to a great deal of envy and even deceit based on power and greed. The perfect fertile garden for growing--and justifying--bad behavior.


Vinnie Hansen – Room and Board


I’ve been living in Santa Cruz, California, for over 35 years. Its unique environment creeps into all my mysteries. Although I’m not a surfer, you can’t live here without a bit of surf culture rubbing off. I’ve stood on the cliffs above Steamer Lane or The Hook many a day admiring the riders on the waves. And I’ve visited the Santa Cruz Surfing Museum, ranked one of the best surfing museums in the world, many times. From a special trip my idea for Room and Board took hold. When I created my characters, I thought of my neighbor’s twins. They’d grown up fifty yards away, swinging by our house at the end of Trick-or-Treating so we could dump all our remaining candy into their bags. They once spontaneously scampered up our towering liquid amber to rescue our cat. My husband and I sadly witnessed these handsome, likable boys sink into drug addiction. They gradually wasted away until they were nothing but skin and bone and hollowed-out eyes hurrying down our street to their next fix. My stories are always built of these Lego pieces of my life. How they snap together is a creative, magical surprise—every time.


Two of the themes I write about are financial crimes and abuse of power. Power occurs when people have unequal footing. Attorneys, with their knowledge and often positional authority, often find themselves in positions of great power. With great power comes great responsibility. In the US, we have a growing population of elderly, who, because of frail bodies and/or minds are at risk of abuse. The intersection of these two groups of people was fertile ground for me to explore through my story.


Though I never decided to steal an exam, my story is based on my background as a physician who took the MCAT many years ago. As the mentor to many pre-med students, who invest thousands in test prep resources, I realize how valuable a stolen entrance exam might be. Because the exam is now computerized, I had to set the story back before 2007, when it was still printed in paper booklets. Hence the reference to MySpace instead of Facebook. It was fun trying to go back in time.

Not long before the anthology call came up I heard a news story about a company that put actual wood shavings into some fiber formula...if memory serves, it was ruled ok by FDA that they did this! So, when the caper challenge was posed, I decided a flimflam artist who did not hurt people with her product would be my heroine. I like to cook, so her prowess in the kitchen is fun for me. Of course I put her in jeopardy because of her poor choices..but that’s the fun of this story.

Susan Daly – My Night with the Duke of Edinburgh

My Night with the Duke of Edinburgh takes place in 1951, when Princes Elizabeth and her husband the Duke made a cross-country tour of Canada. Well, I wasn't old enough for that tour, but I was up for many others in subsequent years. I think the massive excitement generated by the Royal Tour made for a great backdrop for my caper story, when I have a group of students do a little activism.

My story, Scrabble Rousers, is based on people I have known. Old folks who are losing some control over their lives, but still know what they like, and are not above a bit of chicanery. Young care-giver types who are determined to “improve” the lot of their clients, whether the clients like it or not. And my grandmother. She lived to be 104. Volunteer church ladies would come to the nursing home where she resided for the last few years of her life, and ask her what she’d like to do. She’d look vague, say, “Oh, I used to play this word game. Scrabble, was it? Could we try that?” They’d smile, get out a Scrabble game, and she’d beat the pants off them.

Anna Castle – The Lost Mine of Don Fernando

My parents retired to Taos, New Mexico. My mother’s masters degree is in Anthropology and she has long been a student of the indigenous cultures of the Southwest. She has lots of great stories, and likes to share interesting things that she reads. She told me about the Battle of Cienegula in 1854, which took place just north of Taos. A group of Jicarilla Apaches and Utes defeated a troop of American dragoons. Somehow that intrigued me. Then I was researching mining fraud for my Moriarty series, which is all about fraud in the late nineteenth century, and discovered there are in truth lots of lost mines in the New Mexico wilderness. So then my mother told about the terrible abuses perpetrated by the American government on the Apaches in particular and this story came together. It was a lot of fun to write and I hope to meet all these characters (except the bad guys) in another story.


I didn’t pull inspiration for my story Exit Interview from my personal experience directly. Instead, I thought it would be fun to play on the “right man for the job” trope in heist films. For example, in the Oceans movies, Danny and Debbie Ocean pull in members of their crews based on the individual's special skills. Since I wanted to write a slightly satirical story, I decided to see what would happen if you hired an assassin to do a thief’s job. I don’t think it’s a spoiler to say it doesn’t quite work out as the client planned!

Once you read my story, you'll understand why I hesitated in answering this question truthfully. The way it happened is that my husband and I were sitting around one evening, sipping a glass of wine and fantasizing about, well, let's just say, a certain person in our family. What if …? After we finished laughing until we were crying, I sat down and wrote The Great Negotiator. Okay, I'm probably in trouble now.

No, my personal background has nothing to do with this story. I’ve never swindled anyone, gone through a bad divorce (happily single), or even owned a cat (allergies). I just decided to write a “cat story” and somehow it turned into “Nine Lives of Husbands & Wives”. A few friends have gone through nasty divorces, so maybe they influenced the storyline a bit. Otherwise, it was just a fun story to write.