Moving from One Life to Another 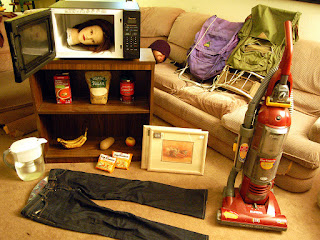 I am currently in the final, panic-driven stages of downsizing before our final walk-through with the buyers of our house. I feel guilty even taking time to write this blog post because I know I don't have enough time left, and we'll be pulling all-nighters to make it. Those are a lot harder when you're in your late fifties and sixties than they were in your teens and twenties, believe me.

I have packed up boxes of books to give to my sister and my friends, and that's not too hard. It doesn't hurt so much to give them away to people I care about. It's the other boxes, packed to sell, that hurt my heart.

The same thing goes for the fabric for my art quilting. It's all beautiful, and though I cannily bought much of it on sale, it's expensive, high-quality fabric and will cost a bundle to replace. But I have reached the limit I set myself for taking to the new house, which is slightly less than half the square footage of our current home but without its copious storage (attics, basement, two-car garage, many built-in cupboards). It was agonizing to choose which to keep and which to let go. I know I should have sold it, but I feel so much better about the bags and bags of gorgeous fabric going to my friends and to an organization I'm deeply involved with.

I've already done this hard work with the glassware and china and silver--and with clothes and linens. I've been fighting the papers-and-books battle all along, and I suspect they'll go on to the end. There's just so much of both categories. I've finally finished the fabric and sewing supplies and am now in the midst of the knitting-and-weaving-yarns-and-needles stash, another heartbreaker. Fortunately, a lot of it will go to my daughter and son, and that will make letting go of half of it so much easier. I don't even want to think about the spinning fibers yet. "Sufficient unto the day is the evil thereof."

I'm a quadruple Scorpio, and one of the symbols for Scorpio is the phoenix, mythical creature that rebirths itself out of destruction over and over. I've always felt that I lived many lives in this lifetime. There was the life that I call Queen of the PTA while I raised my oldest two kids and a foster son. Then there was the life of the divorce years where I went back for degrees and frantically worked multiple jobs to keep food on the table and a roof over our heads. Then there was the life of university administrator, running a women's center and teaching. Etc., etc. I feel now that I'm coming out of the life of cancer patient and getting ready to move into another with this move from my home of 42 years, so here's a poem for that process. 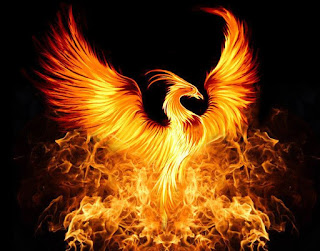 A PHOENIX, SHE MOVES FROM LIFE TO LIFE

and leaves only the ashes of her old self
behind. She plunges into the dark
future from the glare of her funeral pyre
that brightens the sky of her past
for miles and years and leaves a legend
told to generations of children
of a vast golden one whose gleaming
body rose from the burning corpse,
blotting out the moon
with huge wings beating against
the burning air to lift the dead
ground to the living night sky
and fly through the moon
to a new place with new people
where she could be new herself—
until the destroyer strikes again.

Like a hunting eagle,
she lands, claws outstretched,
golden crest and feathers lost
in transit, her wings already disappearing.
She grows backward, smaller.
Now she can only crawl
into and out of shallow holes
in the ground of this new life.
Still, the wise avoid trampling her
for they know
she drags death behind her.