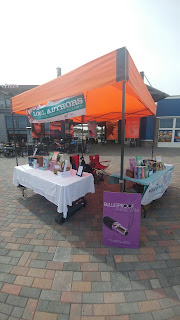 Last weekend, I participated in a local author program called Food for Thought.  Put on by the local business district in partnership with a local literary group, CreativeColloquy, the program hosts different authors each week at a farmer’s market for a minimal fee ($5).  These type of events are great ways to connect with readers, brush up on my “elevator pitch” for books, and see what’s resonating with the public.  The elevator pitch is essentially a one to two sentence synopsis of a book.  And with that many people visiting the booth, I can try out different versions and wording to see what pitch makes people look interested in a book.  For my Carrie Mae Mysteries, slightly older ladies resonate with “It’s the story of what would happen if Mary Kay ran an international espionage organization.”  But the younger women and men do better with “If James Bond was a woman.”  Even if I didn’t end up selling a good amount of books, that kind of market research is pretty invaluable.  But, of course, being out in the public is also a way to connect with the… um… unique individuals that walk among us.

My favorite unique person this last weekend was the gentlemen who told us a series of stories about his experiences with ghosts including some “Indians” because he had been staying at a house built on an “Indian Burial Ground.”  The problem was that as he meandered on about his experiences, the Native Americans he described sounded straight on out of the movies, and lacked any resemblance to the actual tribes that populate the area.  Not all tribes wear “leathers” crazy face.  Our tribes used capes woven from cedar bark and a type of fabric woven from the hair of a now extinct type of dog.  <LEARN MORE HERE>  So… try being more educated before doing drugs. Also, and not for nothing, if a housing developer were to find human remains, archaeologists and police would have to be called and the local tribes would claim the bodies.  Nobody wants to build on top of human remains – they disintegrate, leaving cavities in the ground and make foundations unstable.  It’s unsound construction, OK, nut job?  And also, also, you’re scaring people away from my booth.

But he’s just the tiny fly in the ointment. The majority of people at such events are at minimum polite and usually excited about talking to an actual author.  And in the end, talking to such enthusiastic readers and writers are what keep me coming back to these type of events.  So if you see me out and about, stop by to say hi.  Just don’t tell me about your ghost experience… unless it’s historically accurate.

Bethany Maines is the author of the Carrie Mae Mysteries, Wild Waters, Tales from the City of Destiny and An Unseen Current.  You can also view the Carrie Mae youtube video or catch up with her on Twitter and Facebook.
Posted by Bethany at 12:30 AM