Beginning writers often ask if I ever have writer’s block. I assure them it rarely happens more than once or twice a day.

How do I overcome it? What do I do when it happens? Write. Write mundane details of my characters’ lives. Write about them throwing back the covers and getting out of bed, scrambling eggs, opening a Coke, taking a shower, putting on blue jeans, phoning a friend to ask if she’s read any good books lately. Eventually something interesting will happen, and then I go back and delete the inconsequential parts.

In retrospect, I was flippant, dismissive, and a bit arrogant…but right.

My new book, The Ex Who Saw a Ghost, fourth in Charley’s Ghost series, is a great example of major writer’s block, something I didn’t recover from in a few paragraphs, a few hours, a day, or even a month. It took me over a year to write this book, and there were many times I considered sending it to the Recycle Bin, emptying that bin, pouring gasoline over my computer, and setting it all on fire. My critique partners, my editor, and a beta reader/friend yanked it out of the flames too many times to count. 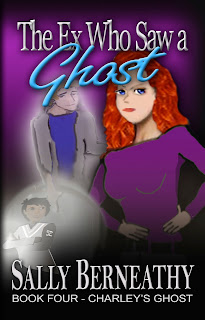 I started this book in January 2015. As with any new book, I began writing excitedly, certain I would produce the best book I’d ever written.

The third week in January I became ill. I don’t like being sick. I don’t like admitting I’m sick. My boyfriend, trapped thirty miles away in the midst of a hostile takeover of the company he works for, called every night to see how I was doing. I told him I was doing fine, just a nagging little cough. I told myself the same thing and forced myself to work on my book. To say those pages were garbage would lend them a dignity they don’t deserve. They were the ramblings of a feverish, oxygen-deprived brain.
Finally I was making so little sense in our nightly phone calls that the boyfriend no longer believed I was fine. He took off work, came over and dragged me to the emergency room. He tells the story that he dragged me “kicking and screaming,” but the truth is, I had no energy to kick and no voice to scream.

I was diagnosed with double pneumonia, temperature 104, oxygen level 72, hallucinations, acute renal failure, all systems shutting down and some other multi-syllabic conditions. They thought I was going to die. I could not, of course, because that book wasn’t finished.

I spent five days in the hospital then another couple of weeks in bed. By the time I returned to my manuscript with an oxygen level back to 99, I realized everything I’d written while ill had to go. I actually should have saved it…to a file labeled, “Ravings of a Crazy Woman.” I could probably laugh at it now. At the time, I was devastated that I had written such garbage.

I got back to work on the book. Except the book didn’t want to be written. What on earth had I been thinking when I started it? Whose idea was it to write about that? Surely not mine!

The boyfriend of twelve years decided this was the time to get serious about moving in together since, “I can’t trust you to live alone! You lied to me! You could have died!”

I wasn’t really lying. When somebody asks how you are, you say, “Fine.” Right? You don’t say, “Oh, I stubbed my toe on the coffee table, I nicked my finger when chopping tomatoes, I can’t breathe, and my great-grandmother, Wolfman, and Elvis Presley just came to visit.” Who wants to hear such whining?

Anyway, we found a place and put our houses on the market…and I began an episode of PTSD that lasted several months. In 1986 I sold my house in Dallas, moved to Kansas City and married the Maxhole, an abusive, control-freak piece of pond scum who tortured me and held me prisoner for seventeen years. Although the boyfriend is nothing like the Maxhole, I was selling my home in a place I loved and moving to another state with a man I trusted. Flashbacks!! I had a total meltdown every few days with no recovery time in between.

Through all the chaos, I forced myself to keep writing. The pages I produced during these months weren’t even entertaining as the ramblings of a mad woman. They were mundane. Illogical. Boring. Writing was no longer fun. Writing was torture. No surprise. My brain was tortured!

But I continued to struggle. I rewrote each chapter four or five times. Note that I did not say I revised each chapter. I rewrote them completely over and over.

Around the middle of October when the PTSD attacks finally settled down, I looked at the chapter I’d been slaving over for three weeks…and saw immediately what the problem was. My writing brain had returned! I went back to the beginning of the book and made major revisions. In every chapter, every sentence, I could see what was right, what was wrong, what needed to be changed or deleted. After that, I easily finished the last half of the book in a few weeks.

This was definitely the worst case of writer’s block I’ve ever had. I wanted to stop working on that book. I wanted to stop writing. Thank goodness my critique group and friends kept pushing me! After the third round of revisions, I sent it to my editor. She said it was really good, just needed a few tweaks. On my sixth and final pass through the book, I realized—OMG! It’s a pretty good book!

Since its release last week, that book has had only 5-star reviews. I’m sure that won’t continue. It never does! But I have been able to breathe a huge sigh of relief. After all the struggles, I managed to turn out a book people enjoy reading.

I hope I never have that level of writer’s block again, but it has given me a better understanding of the real meaning of that term. Sure, most of us have moments of mini-blocks. Most of us struggle every day to get the right words on the page…then change those words the next day to the new right words. But the real thing, the total blockage of the creative process, is a fire-breathing dragon of gigantic proportions who gobbles up your thoughts before you even think them!

At the same time, the experience validated my original cure…just keep writing. Eventually you’re going to write something worth keeping.

Posted by Sally Berneathy at 2:00 AM