My Ode to Online Friendship

Remember when news articles decried the horror of online meetups? Headlines shrieked about how dirty old men preyed on unsuspecting youngsters by pretending to be their same age, plus also winsome and cute. Columnists warned that you couldn’t trust connections made online.

If memory serves, that was back at the turn of the millennium when those articles were rampant. I don’t think I’ve read that kind of thing in a long time now. The online world is so much a part of us now that using the Internet is almost as normal as walking across the street. Sure we know dangers exist when crossing the street. We do it anyway but we are careful. Same with the Internet now.

Of course bad things can still develop from unscrupulous dealings online. But there is also mail fraud, phone fraud, and so on. Whenever humans get involved, someone is going to turn the technology to the dark side.

But, oh, what about the glories of the light side? What about those friends you would never have met if not for, say, your Facebook page?

This week I had a delightful meetup with a friend I made online. I don’t recall exactly how long Christy and I have been friends, but it is well over a year. She lives in the vicinity of Dallas/Fort Worth, and I live south down Interstate 45, almost 300 miles away in Houston. I feel safe in saying that the chances of our crossing paths were almost nil.

Christy is an avid reader, and she was taken with the fact that I had become an author. She had spent some time in Houston and knew the city because of visits to relatives here. Once upon a time I visited my grandparents in Dallas four times a year and know the city in a similar fashion. She has an only son. So do I.

And speaking of my son, Christy is about his age. Still, despite our age difference, she and I became friends.

A few months ago when she IM’d be to say that she and her husband and son were going to vacation in Galveston, she asked if perhaps we could meet. I jumped at the chance. We arranged to meet at a Starbucks not too far from I-45 as it passes through my big city.

She and her husband and son were delightful, so nice that they counterbalanced my occasional feeling that families today don’t take of each other very well. Her son is now a keen reader too, and he was well-mannered and pleasant, looking forward to starting sixth grade next fall. Christy’s husband was what used to be called a “good family man,” interested in talking about their three dogs, about the fishing trip they’d taken on the Gulf during their stay in Galveston.

Christy brought me a white ceramic bowl that I will treasure always. It sits in a metal nest of twigs, and a bird perches on it. I gave her a copy of my new book, Rainy Day Women, and a handful of bookmarks about it.

They got back on the road, and I left for the post office. And my heart was filled with such joy. Wonderful people still walk this earth, and sometimes the Internet can help you find them. 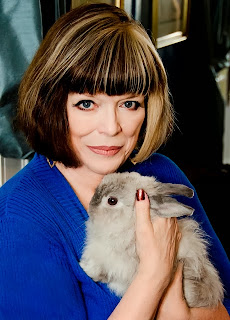 Kay Kendall is a long-time fan of historical novels and writes atmospheric mysteries that capture the spirit and turbulence of the sixties. She is also an award-winning international PR executive who lives in Texas with her husband, three house rabbits, and spaniel Wills. Terribly allergic to her bunnies, she loves them anyway! Her book titles show she's a Bob Dylan buff too. RAINY DAY WOMEN publishes on July 7--the second in her Austin Starr Mystery series. The E-book and paperback are available for pre-order now, and the audio-book will be soon.